A computer rendering of the new ConAgra Foods processing facility in Boise, Idaho. 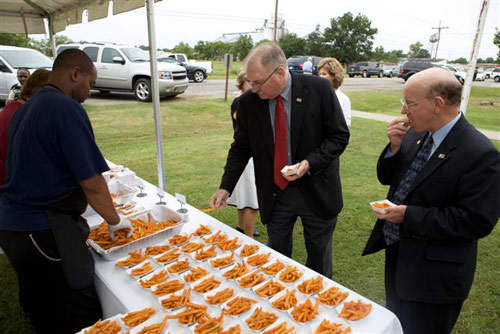 At the announcement of the new plant in Lamb Weston Delhi, some sweet potato fries were sampled. 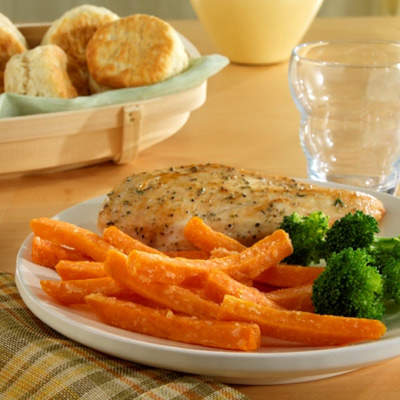 In the US, sweet potato fries are seen as a healthier alternative to normal potato fries. 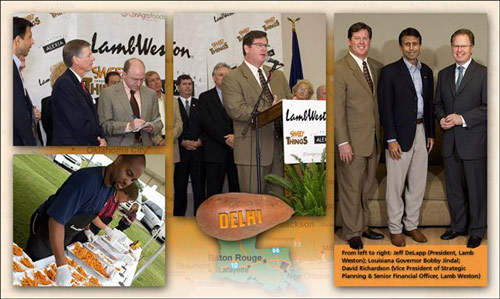 Delhi was chosen because it is in the heart of a major growing region that produces good quality sweet potatoes.

ConAgra Foods Lamb Weston, based in Boise, Idaho, is one of the US’s largest suppliers of frozen potato, sweet potato, appetiser and vegetable products, serving the food service and retail markets. It has annual sales of over $1bn.

With a 21% increase in sweet potato product consumption across the US in the past five years, as indicated by a USDA survey, ConAgra Foods decided in August 2009 to open a new sweet potato processing and freezing plant.

Additional marketing survey information from Technomic in 2007 confirmed that 85% of the US population prefer sweet potatoes as a healthier alternative to similar vegetables.

According to an economic impact analysis conducted by Louisiana State University, the Lamb Weston’s Delhi facility is expected to generate $70m in Louisiana state tax revenue and $19m in local tax revenue over the next 20 years.

The ConAgra Foods Lamb Weston facility was constructed on a site in Delhi, north-east Louisiana.

The plant was designed in a modular fashion to allow the company to expand or modify production for other types of products, including traditional potato items, depending on consumers needs.

The first phase of the plant, completed in November 2010, will produce sweet potato fries and related products from locally grown sweet potatoes.

The plant supports local growers and the first phase created more than 1,050 jobs, including full-time and indirect jobs.

ConAgra invested $156m in the first phase of the project and will invest another $55m-$100m in the second phase. The company’s total investment in the facility is expected to reach $256m by 2014.

The state of Louisiana is providing incentives for the project through the Mega Project Development Fund. ConAgra is expected to receive a grant of $32m-$37.5m for processing equipment and site infrastructure from the fund. The precise amount of the grant will be based on the size of the second phase of the project.

In September 2009 ConAgra announced that Fisher and Sons of Burlington, Washington was selected as the general contractor for the Delhi plant. The designers of the plant are FSI Architects, an architectural division of Fisher and Sons.

Several sites were taken into consideration for the construction of the facility. Louisiana was chosen because of the availability of a skilled workforce, support from the local and state government, and attractive financial incentives.

Several sustainable features, including a climate-controlled environment, were incorporated across the facility.

The climate control feature avoids condensation and water build-up in the floors. This in turn helps in improving employee productivity and safety.

ConAgra has also retained over 100 acres of the site as open space to safeguard nearby wetlands, ponds and other vegetation. Water conservation is provided by landscaping using native vegetation.