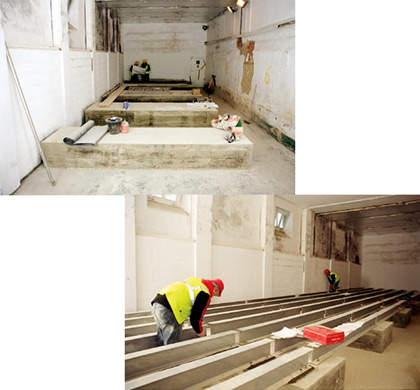 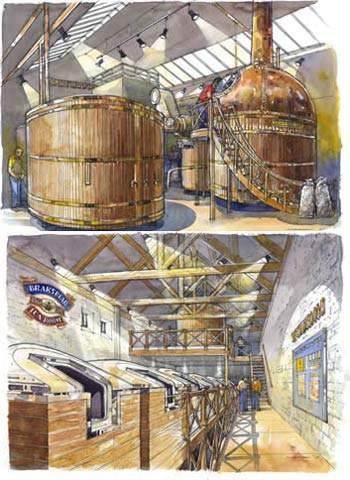 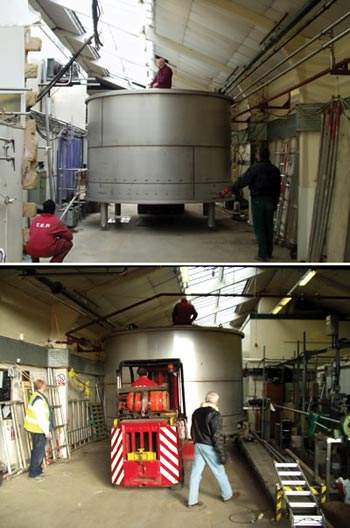 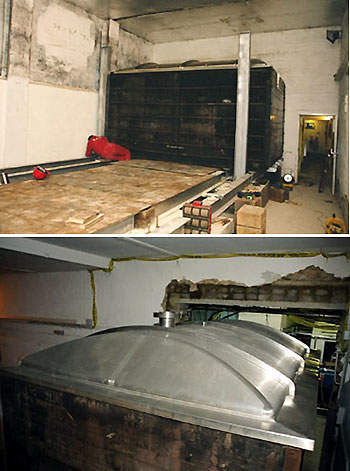 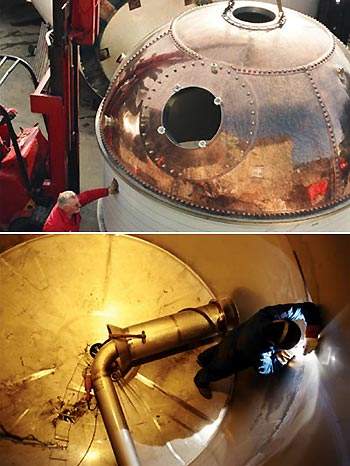 New mash tun being placed in the brew house. 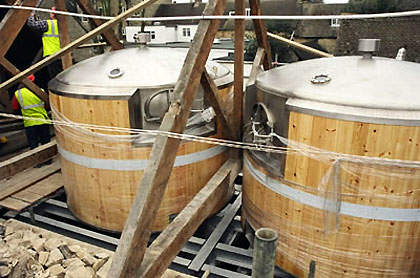 Square fermenter being placed in the fermenting room.

Dropping vessels being placed as part of the double drop process.

In October 2002 the Brakspear Brewery in Henley, UK, ceased to brew their characteristic beers – Brakspear Bitter and Brakspear Special. The company sold the brewery site for £9.2m to property developers and also sold all of the brewing equipment to Refresh UK for £750,000.

The intention was for Refresh UK to contract brew Brakspear’s main beers to supply Brakspear’s chain of public houses in the South West of England. Refresh UK decided in early 2003 to recreate the Brakspear Brewery on a different site using the original equipment, since the flavour of the beer could not be recreated using modern brewing methods.

It was decided to form the Brakspear Brewing Company as a partnership between Refresh UK and Brakspear’s pub chain. The Wychwood Brewery in Witney, Oxfordshire, already owned by Refresh UK, was chosen as the site for the brewing facility.

The new Wychwood Brewery opened in mid-2004 and was producing quality ales by August 2004 following a series of test brews. The project cost was estimated at £10.2m.

Heavy engineering work, refitting and logistics on site were handled by TEP. Bedford Stainless was the contractor responsible for repair and refit of the copper kettle vessel. The new hot liquor tank, a sectional mild steel tank, was produced by Braithwaite (Newport, Wales).

Sonedd were the boiler engineers responsible for preparing and servicing the boilers for inspection and validation.

The concrete foundations for the new Brakspear fermenting room were put in place in December 2003. By the end of January 2004 the unique Brakspear square fermenters were positioned in what was once the maltings for the old Clinch’s brewery at Wychwood.

Steel work was erected around the fermenters to support the installation of Brakspear’s famous ‘double drop fermenting system’ during February 2004.

The double drop system has one bank of fermentation vessels on a steel supporting structure set up to drop the wort into a second batch of fermentation vessels below after an initial 24 hour period. This allows the beer to aerate and develop a distinctive ‘butterscotch’ flavour due to the presence of oxidised diacetyl in the beer.

Thus the Wychwood beers including Hobgoblin, Circle Master and Fiddler’s Elbow are being produced in a new fermenting room. The Wychwood brewery now needs the extra space to cope with the increasing national demand for its line of products.

The brewing process starts with the hot liquor tank where water is heated for the mashing process. Malted barley (the malting process breaks down the complex starches and proteins allowing them to be used in brewing – the longer barley is malted the darker it becomes with richer flavours to produce different types of beer) is gristed or ground and then needs to have all the sugars extracted.

“The company is now brewing a range of organic beers for the Duchy Originals brand.”

The mash tun extracts the fermentable sugars from the gristed malted barley through heating to 66°C to form wort. The sweet wort is added to by the sparge from the mash (the mash is washed by heated water to remove all fermentable sugars).

The copper kettle boils the wort so as to sterilise it and hops are added to generate the typical bitter hop flavours.

Boiling in the copper kettle then removes all unpleasant flavours and aromas (flavour can be controlled by the stage at which the hops are added).

The wort is then pumped into a whirlpool to remove fine particles and then through a paraflow heat exchanger to cool the beer to 16°C before the yeast is added. The beer is then pumped to the fermenting room.

In the fermenting room there are six square fermenters at ground level and two circular vessels up in the roof. The arrangement is called the double drop system.

The cooled beer spends 16 hours fermenting in one of the top vessels and is then allowed to fall into one of the square fermenters underneath. Any solids are left behind and the beer is gently aerated (encourages an ‘acetyl’ butterscotch flavour because of the aeration).

The double drop achieves a special and very rare two-stage fermentation process. The beer spends a further 24 to 48 hours in the square fermenter before being cooled for three to four days and then racked to a cask and warehoused for conditioning (shelf life only four weeks).

The water in Witney is similar but not identical to Henley’s but it is treated with gypsum salts to achieve the right balance of hardness and flavour.

The Brakspear equipment reinstalled at the Wychwood brewery in Witney is largely of 19th century manufacture. However this is required to maintain the distinctive flavour and quality of Brakspear beers.

The cask-conditioned beers which are fined and stilled on the remains of the yeast have a four week shelf life but the brewery also produces ‘bright’ or fined beer which is pasteurised and sent to be bottled and canned for the supermarket customer.

“The new Wychwood Brewery opened in mid-2004 and was producing quality ales by August 2004.”

The company is now brewing a range of organic beers for the Duchy Originals brand (Prince Charles) and also brews exclusive beers for Sainsburys (Osprey and Firecrest). The brewery is one of the UK’s largest producers of organic beers.

The company mainly produces cask-conditioned ale with a limited shelf life of four weeks for public houses (50,000 barrels per year, over 8 million litres) but also does a large range of bottled and canned ales with a much longer 12- to 18-month shelf life for supermarkets.

In April 2008 Marston’s PLC acquired Ryland Thompson Limited and all of its subsidiaries including Refresh UK plc (2007 turnover of £24.9m). Marston’s has a strategy of developing a portfolio of well-established premium beer brands to complement the market leader Marston’s Pedigree. Marston’s is committed to continuing operations at the Wychwood Brewery in Witney.

Rupert Thompson, chief executive of Refresh UK plc, commented: “Refresh has achieved a great deal in the eight years since it was founded. It is now the number three supplier of premium bottled ales to supermarkets and Hobgoblin is one of the fastest growing premium ales in the UK. The next stage in the business’ development was likely to involve a linkup with a larger partner or an acquisition. Marston’s has shown a real commitment to building an exciting range of quality premium ales. I am confident that Marston’s will provide a great home for Refresh, allowing its brands and people to develop further.”

Alistair Darby, managing director of Marston’s Beer Company, commented: “We are delighted to welcome Refresh to Marston’s. We plan to develop its excellent brands as part of our strategy to meet growing consumer demand for premium ales with strong provenance and heritage. Our premium ale business continues to deliver good, consistent growth and we look forward to repeating the success of the Jennings and Ringwood brands with the Refresh portfolio.”