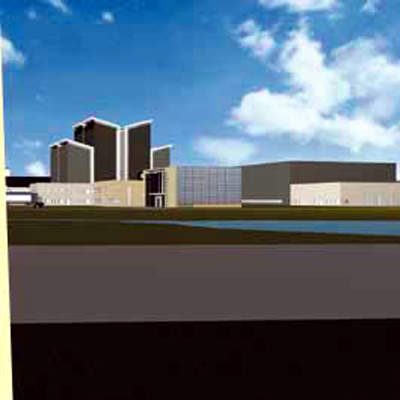 Artist's representation of new facility being built at Vimmerby. 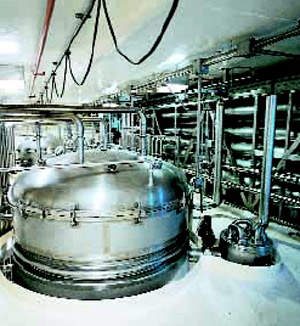 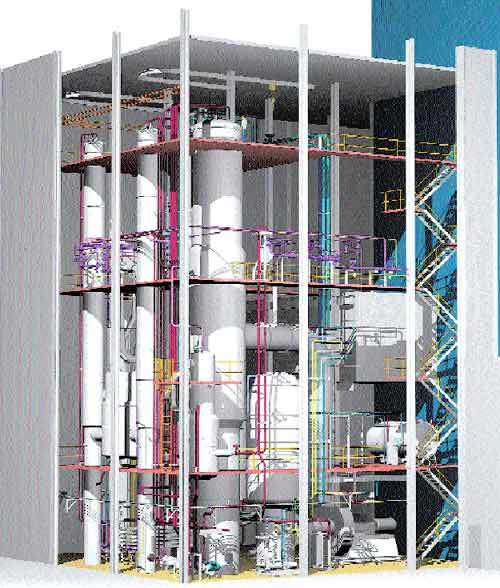 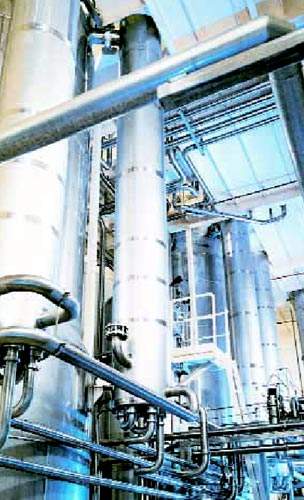 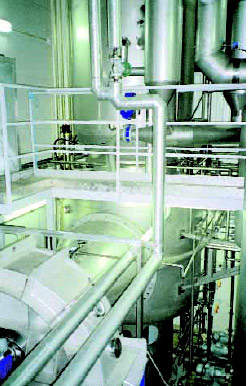 Part of the flash cooling equipment in the process plant. 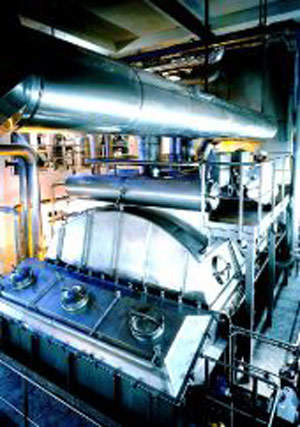 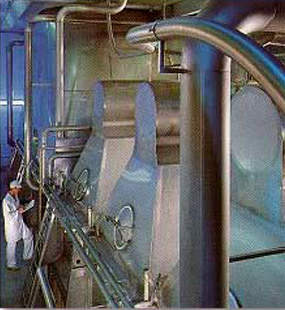 Arla Foods Ingredients started the construction of its state-of-the-art whole dried milk production facility in August 2003. The plant was built as part of a centralisation and rationalisation plan formulated by Arla Foods in 2001, with a total investment of DKK2.3bn. The plan included investment in milk processing plants, such as Vimmerby, and the closure of 17 dairies in Sweden and Denmark over a five-year period from 2001 to 2006.

The idea behind consolidation at Vimmerby was the low capacity for milk powder production in Sweden at the time. Arla Foods’ existing milk powder factories were also out of date and had poor geographical placement. The plant is close to arterial road 33 and 34 for milk deliveries from south east Sweden.

The Vimmerby plant was constructed on a Greenfield site and required an investment of SEK800m, but further infrastructure improvements had increased this figure. The plant was mechanically complete and ready for commissioning by November 2004 and following the commissioning and validation process was in full production by April 2005. The facility is now one of the largest milk powder production plants of its kind in the world and has 70 employees.

History of the consolidation

Arla Foods was formed from a merger in 2001 between Arla (Sweden) and MD Foods (Denmark). Immediately plans were made to consolidate production facilities across the group. In April 2004 Arla Foods sold the cheese dairy in Västervik, and the milk powder factory, at Kimstad, in Sweden as well as the cheese dairy, Brørup at Mejeri, in Denmark. The Kimstad milk powder factory closed at the end of 2004 (50 employees transferred) and the buyer took over the property in March 2005.

The powder factory in Vimmerby then assumed Kimstad’s production of milk powder. In addition the whey processing plant at Mjolby (30 employees transferred) in Sweden was closed and its production transferred to the Vimmerby facility. The Gotene plant in Sweden also lost some of its production capacity to the plant but retained its special infant formula (Semper) production.

The factory has the capacity to process 380 million kilograms of milk each year, which corresponds to one-fifth of Arla Foods’ milk quota in Sweden. The plant produces 44,000t of whole milk powder per year and is capable of producing a range of products, including whole milk powder, skimmed milk powder, high-protein whey powder and buttermilk powder. The products are packed in 25kg, 750kg and 1,000kg bags for use as food additives for production of ice cream, chocolate, cakes and a range of other food products.

Vimmerby Energi AB was originally contracted by Arla Foods and Vimmerby district council to provide the plant with power. However, the energy supplier withdrew from the agreement and delayed the project for three months while alternative arrangements were considered. The problem was resolved when Arla Foods installed its own bio-energy plant, using inexpensive and renewable energy resources supplied from nearby forests. The district council bore the cost of improving the local water works, wastewater treatment facility and also a steam generator for the plant.

The heating plant for the facility has a total capacity of 38MW. As the milk powder plant consumes a maximum of 20MW, reserve oil boilers were installed for peak load situations to ensure a constant supply of steam and hot water.

The plant consumes around 125,000m3 of biomass a year, accounting for some 80% of energy needs. Fuel oil with a low sulphur content, class EO1, covers the remainder of the plants energy requirements.

The plant uses speed and technology to overcome the greatest problem for whole milk processing, which is the oxidative instability of the fatty acids in raw milk. The raw milk is weighed in as it arrives in the plant. In the next stage, the milk is separated and pasteurised at 74°C for 16 seconds and then immediately flash-cooled by a heat exchanger and refrigerated to below 50°C. The rapid cooling process slows the deterioration of the milk fats due to oxidation.

Subsequently, the liquid milk is taken through to an evaporation process. Evaporation is carried out in a falling film evaporator; this step concentrates the dry matter in the milk to 48%. The concentrate is then passed to the heart of the process – the spray drying tower – where it is dried to a semi-dry powder by a counter-current of warm gas. The semi-dry powder falls to a belt where the final drying process is carried out prior to filtration and packing. The water content in the powder at the time of packaging is 3.5%.

Milk is one of the more complicated matrices to process into powder form; it is extremely difficult to spray dry due to the carbohydrate, fat and protein content. The drying of such hygroscopic and slow crystallising products involves handling of very sticky intermediate compounds at a lower temperature level than normally possible in conventional spray drying layouts. Successful drying under these conditions requires the powder to be held within the dryer for an extended period of time.

The Filtermat uses nozzle atomisation in a co-current tower that directs the semi-dried particles down onto a moving belt system. The material is conveyed as a porous layer through progressive zones of post-drying and cooling; this process results in a crisp cake-like structure, which breaks up at the end of the belt and is discharged through a final particle size control system. The exhaust air streams pass through the material layer on the belt to aid drying. The processes used are designed to treat the product gently to avoid fines and dust production.

The process and manufacturing execution system automation work, carried out in the plant by Rockwell Automation,is based on ProcessLogix, RSBatch and Bizware inclusive of Factory Talk, software and protocols. The automation also included 2,600 process tags.