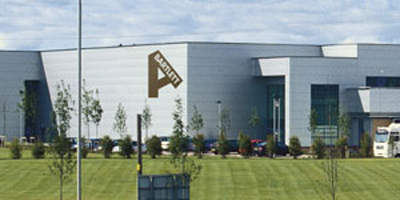 The Airdrie processing plant in Scotland. 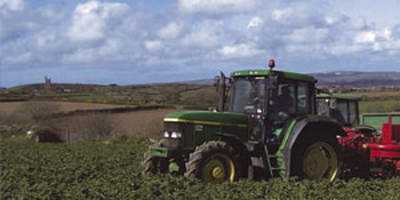 Albert Bartlett is one of the biggest potato growers in the UK. 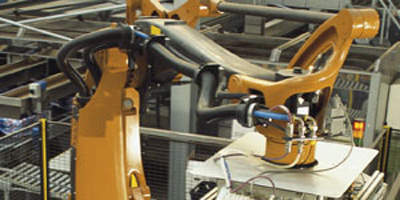 The plant is heavily automated. 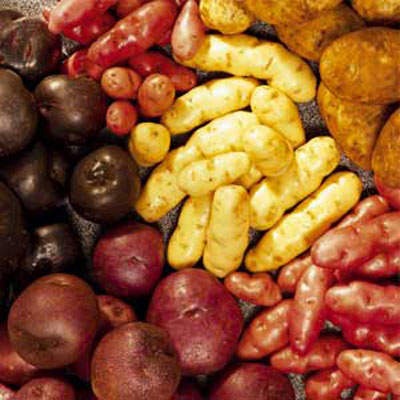 A variety of potatoes are packaged at the facility. 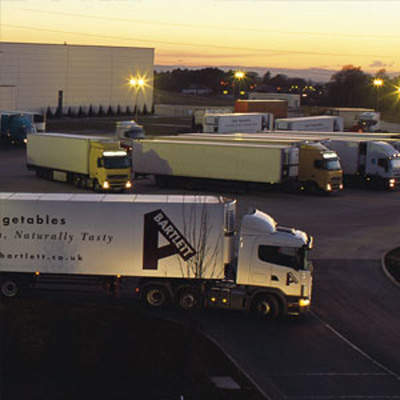 The facility supplies many of the UK’s largest supermarkets.

Albert Bartlett is one of the largest vegetable grower/supply and processing/packaging companies in the UK, supplying over 500,000t of root vegetables every year. The company is responsible for the packaging of graded, washed and bagged vegetables for some of the largest supermarkets in the UK as well as marketing its own brands such as Rooster Potatoes and Regional Royal new potatoes.

The company operates on trust with supermarkets, having no formal supply contracts but just ‘gentleman’s agreements’. Albert Bartlett has sites at Airdrie in Scotland and Chatteris in Cambridgeshire; Airdrie being the centre of the potato processing operation (also the corporate headquarters) and Chatteris the centre for the carrot, onion and parsnip operation (Chantenay and Nandor bunch carrots are supplied to Tesco).

The 56-acre state-of-the-art facility in Airdrie was first opened in November 2003, costing an estimated £18m. Since that time it has undergone a £30m investment programme because of the demand for the high quality products supplied by the company.

The investment programme included the improvement of processes, further automation and introduction of new robotic and digital camera technology, additional packaging lines and some expansion of buildings. Improvements to the facility were completed by mid 2007..

“Albert Bartlett is one of the largest vegetable grower/supply and processing/packaging companies in the UK.”

In October 2010, a new variety of potato called Purple Majesty went on sale in the UK. The purple potato contains nearly ten times the level of antioxidant and anthocyanins compared with white potatoes.

The potato was developed at Colorado State University and is grown and harvested by Albert Bartlett. It is not genetically modified but developed from a traditional variety. Albert Bartlett harvested only 400t initially although it plans to boost production in 2011.

The operation at Airdrie has 25 packaging lines for potatoes. The packaging lines are enhanced by robotic technology for sorting and grading, as well as human assistance to improve safety and efficiency. The company has also invested in hydro coolers
that remove field heat, reducing condensation and naturally extending the shelf life of the new potatoes.

The potato lines are monitored constantly during the process so that potatoes can be graded accurately and substandard potatoes can be diverted into the reject hopper for processing into pig food. Each potato is inspected three times using the latest
digital camera and neural network technology to recognise dark spots and defects. The speed and time critical nature of the operation mean that any maintenance has to be planned for far in advance, and ideally the maximum wear life is expected of
every component.

To reduce the downtime of the facility’s packaging lines, the company has introduced Tsubaki roller chains on each line. This upgrade, supplied by local power transmission specialist Scots Bearings, has shown the maintenance team at Bartlett’s that
Tsubaki roller chains can reduce operational problems significantly.

Tsubaki Lambda lube-free chains are seen as a further upgrade possibility for some areas of the plant, along with lube-free Lambda WP water protected chains for use on the drum washers where stainless chain is currently used.

Albert Bartlett and Sons was presented with the Vision in Business for the Environment of Scotland (VIBES) Award for large businesses and the overall top national award for 2005 for the Airdrie facility. VIBES recognises and rewards the efforts of Scottish businesses to become more efficient and competitive by improving environmental performance and sustainability.

“Around 70% of the processing water is sourced from the factory roof.”

Around 70% of the processing water is sourced from the factory roof and the remaining 30% is provided by borehole. Mains water was only used in the commissioning of the site.

In addition, dedicated lines at the facility allow the separate recycling of water and soil residues that come from local produce, imported produce and organic produce.

The company also won a Silver Award at the 2005 Green Apple Awards for environmental achievement and commitment.

In April 2008 the company received the International Safety Award from the British Safety Council because of its modern facilities across the country and in particular Airdrie.