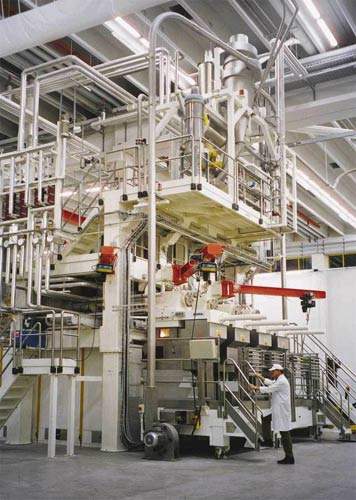 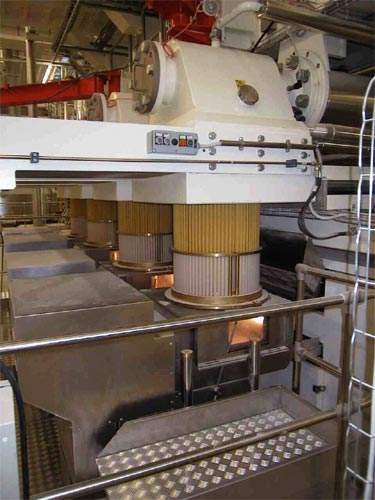 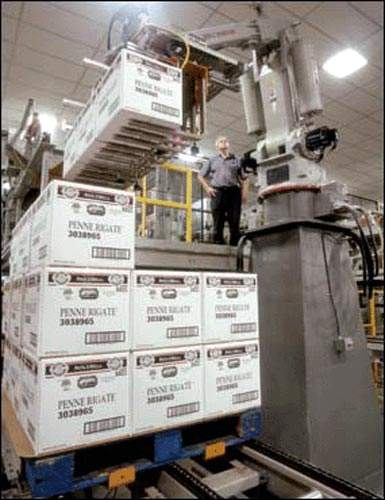 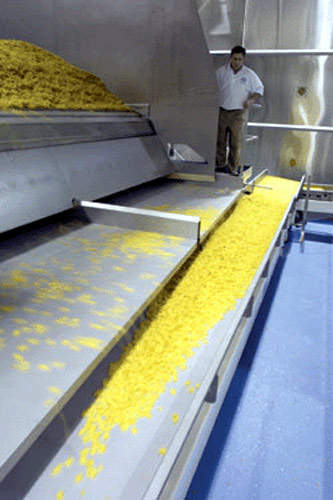 Short goods on their way to the dryer. 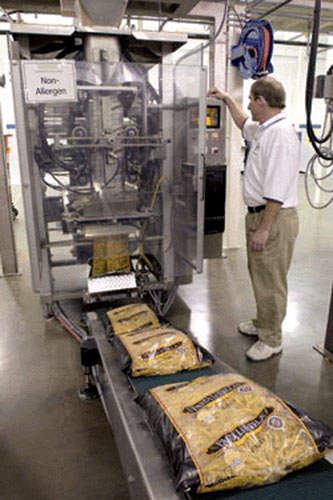 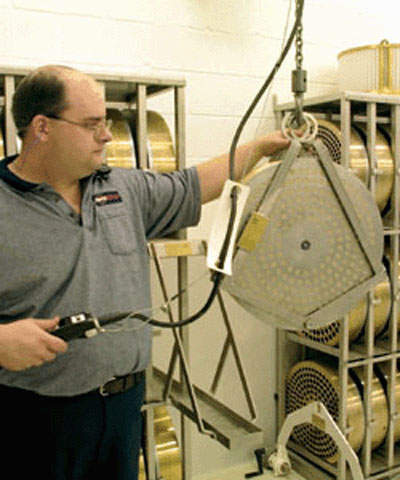 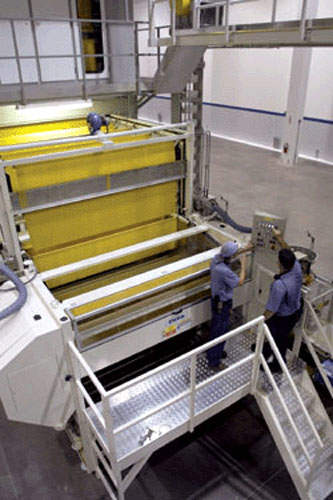 The Kansas City-based American Italian Pasta Company (AIPC) officially opened its fifth pasta and noodle production plant in Tolleson, Arizona, in April 2003. The pasta maker has been established for over 20 years. The plant broke ground in April 2002 and construction was started in May 2002 on a previously developed 23-acre site in Tolleson. The company won the Food Engineering Magazine award in 2003 for the construction and implementation of the facility.

The site already had an existing building, which was previously owned by Borden Foods, with 205,000ft² of floor space. Borden was a pasta producer at the site from 1978 producing 93 million pounds a year on nine production lines. The new plant, incorporating the existing buildings, also required the construction of a new extension of 280,500ft².

The plant was located in Tolleson because of its central location to the company’s customer base, which keeps distribution costs low, as well as the proximity of locally-grown high quality ‘desert durum’ wheat, which is the main raw material at the plant.

The proximity of the Bay States Mill to process the wheat and the skilled local work force (the Borden plant produced pasta and so an excellent skills base was already in place) were also valuable factors. The plant required an investment of $47m and included a location incentive from the Greater Phoenix Economic Council (GPEC).

During the construction process engineers from AIPC assembled two pasta dryers, now increased to four dryers, weighing a combined 35t. In an effort to save time they were assembled in an adjacent warehouse space while the production area was still being constructed. The two dryers were then lifted into their final place in the production building using eight 10,000lb forklifts.

The buildings of the existing facility were finally deemed to be unsuitable to house the new production lines and so were converted to warehousing and packaging areas. The new building formed the main production area and houses four production lines, which are capable of producing 330 million pounds of pasta per year.

Initially, two production lines were installed with a capacity of 109 million pounds per year, employing 50 personnel, but this was quickly expanded.

“The new production lines are capable of producing 330 million pounds of pasta per year.”

The total capacity of the facility includes both long goods and short goods (shaped pasta) dried, finished and packed.

Even during the US obsession with low carbohydrate foods the company still showed growth by adapting to the market and modifying their product range to include low carbohydrate pasta products.

AIPC constantly includes new brands in its repertoire to maintain an active market.

In March 2008 the company introduced three new brands for its food services customers. These included:

The Bay State Mill, which produces semolina meal for the plant’s four production lines has recently completed new silos to store one million bushels of grain to supply the facility in 2004. Although as the Tolleson plant expanded from two lines to four lines the company has had to source some of its semolina requirements from other suppliers.

Reimelt Incorporated engineered a custom bulk handling system to feed the production lines with semolina. Fifteen storage silos were constructed to store the milled semolina and feed a 700ft-long, 6in-diameter pneumatic tube, which can deliver some 62,000lb of semolina per hour to the production lines.

Semolina is delivered from the silos and then mixed with water treated by double reverse osmosis to form pasta dough. The dough is mixed, stretched and allowed to rest on a stabilisation belt. The dough is then fed into two extruders. Vacuum is applied to the dough to remove air and it is then extruded at a pressure of 121 bar through a die.

“The facility has been designed to achieve super grading from the American Institute of Baking (AIB).”

Short goods are trimmed off and fall to a conveyer to be taken away and dried while long goods are picked up by horizontal bars in 46in lengths. The long goods are dried and then cut to length.

The automated pasta line for short goods production consists of a press with double mixing and extrusion groups for bicolour pasta production – Model FAST 210.2 – 520. A double pasta cutter produces the shapes from the extrusion.

This then feeds a shaker-predryer to remove excess moisture and start the drying process. The dryer then completes the process.

The dryer and predryer are fed with humid air from two 600hp Cleaver Brooks boilers that generate 25 million BTU. The air is circulated using electric fans. Moisture content and temperature are carefully reduced over 5–8 hours before the product is ready for trimming and packing.

Packaging is carried out in a form, fill, seal fashion using plastic wrapping for short goods and a combination of plastic and cardboard for long goods.

Robotic technologies were supplied by FKI Logistex Alvey Systems Incorporated to carry out packaging, warehousing and storage functions. Three articulated arm robot palletisers were installed. These have the advantage of being much faster than standard robot gantries for warehousing and they also occupy much less floor space. The palletisers feed the pallets to a Lantech stretch wrapper. The wrapped pallets are then conveyed to the warehousing area. The new technology allows 83 pallets an hour to be processed.

“The AIPC plant at Tolleson also won a major food industry award in 2005 for its production at the plant.”

Cleanliness is very important in the plant. The facility has been designed to achieve super grading from the American Institute of Baking (AIB). The AIB provides the plant with instructors for training courses on HACCP and food plant sanitation. Part of the sanitary design for the facility included rounded roof joists and pharmaceutical-grade Teflon-coated ceiling tiles to prevent dust accumulation. Pharmaceutical-grade tiling was used in all production areas.

Food safety is very important and this has meant the establishment of nine Critical Control Points (CCPs) along each of the production lines. Multiple CCPs are required to track down problems in a highly automated line with few employees.

AIPC is the largest producer of dried pasta in North America. It produces 175 different shapes and colours of pasta and noodles. The company supplies Sysco (but in June 2006 lost its mutually exclusive contract to supply pasta with the Sysco label although it still continued to supply them to a lesser extent), General Mills, Kraft and supermarkets such as Kroger, Wal-Mart, Cost-Co, Sam’s, Western Family, Smart & Final and Safeway. The AIPC plant at Tolleson also won a major food industry award in 2005 for its production at the plant.