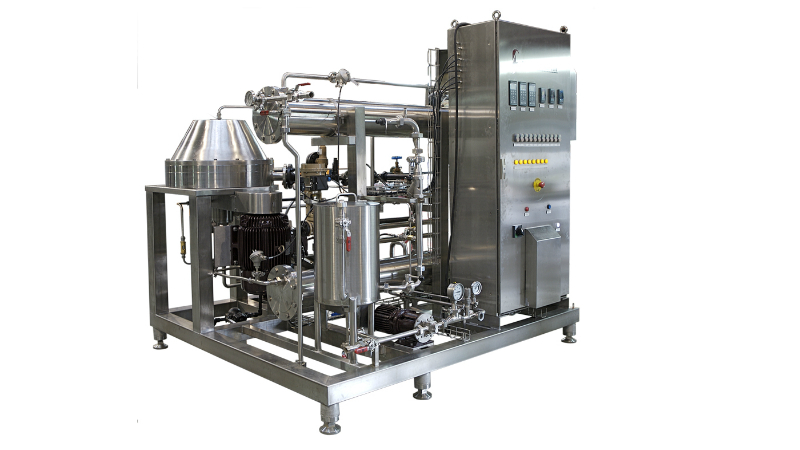 Units are also available with either an external or internal condenser depending on the specific application’s requirements. The main application for this technology is separation of agricultural residues from various citrus oils.

The Centritherm® High Vacuum evaporator uses centrifugal force to create a thin film of product on a rotating conical heated surface. The film thickness is fractions of a millimeter, enabling a rapid transfer of heat energy and hence effective evaporation of the volatile material. The centrifugally induced film is much thinner and more evenly distributed than that in traditional wiped film evaporator units.

The centrifugally generated thin film results in residence times on the heating surface of less than one second. This is substantially shorter than other forms of thin film evaporators, which have residence times of 15-20 seconds.

Due to the very short contact time with the heating surface, thermal impact on the product is minimal, even when working at the relatively high-temperatures required to separate compounds that have high boiling points.

The units are constructed as compact modular systems, complete with pumps, pipe work, electrical and control systems. The modular design allows for easy installation of the units in parallel or in series to suit specific applications, particularly where multiple separation steps are required to isolate a particular compound.

The unit can be delivered with both an internal and an external condenser, which are simple and quick to install and remove, allowing operation at a broad range of vacuums. This makes the technology particularly suitable for small production or research and development (R&D) facilities where multiple products are required to be processed.