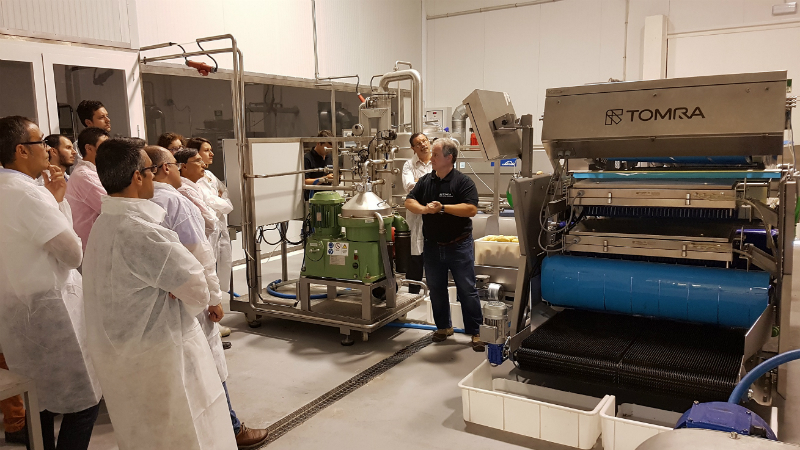 From 3 July to 7 July, the National Technological Centre for the Food and Canning Industry (CTC) in Molina de Segura (Murcia) hosted the Conference on Optical Sorting of Whole Vegetable Products.

During the conference, TOMRA demonstrated the Sorting Food’s Sentinel II to companies and engineers from the food industry. This high-tech solution for vegetable sorting based on colour, form, and size helps eliminate foreign material.

The conference was jointly organised by the CTC, TOMRA, and distributor of TOMRA Sorting Food in Spain Luciano Aguilar. Aimed at more than 15 companies and engineers from the food and related industries, TOMRA’s technology and the advantages it offered for the optical sorting of whole fresh vegetables received high levels of interest.

The Sentinel II remained installed in the demonstration plant of the CTC during the duration of the conference. The first day was an open day, while the remaining four were dedicated to customer demonstrations, where they could test with their own products.

Sales manager in Spain and Portugal for TOMRA Sorting Food Alejandro Palacios says: "This was the first demonstration we gave on the Sentinel II. We will also exhibit it at the Fruit Attraction trade show next October in Madrid.

We are very happy with the result of the conference as Spanish companies are showing great interest in TOMRA’s advanced technology. This interest resulted from the machine’s added value, its specific characteristics that are unique in the market, such as its ejection system, robust design, and a double-sided view of the product."

TOMRA made its optical sorting equipment available to visitors that process vegetables, such as potatoes, peppers, and tomatoes, which enabled them to understand and see first-hand the performance, power, and advantages of the Sentinel II sorter as a highly efficient and cost-effective machine suitable for both seasonal and year-round processes.

Production manager of vegetables and pre-cooked meals at Ultracongelados de la Ribera Cedric Rolland commented: "We have been using TOMRA machines for years because we think its technology is very interesting and meets our needs. It competes with the traditional technologies and guarantees a fast and very efficient processing."

The Sentinel II is not only easy to operate, install, and use but also very versatile. This attracted the attention of Mr. Rolland: "The built-in software for reaching an optimal level of detection and ejection settings is easy to operate. Another highlight of the machine is its optimal design for easy installation, maintenance and cleaning. What is also noteworthy is the wide range of products the Sentinel II is capable of processing, for both our specific market and many others."

In general, Cedric Rolland showed his overall satisfaction after the conference: "As for the TOMRA team, I was satisfied with the support and attention received from the TOMRA employees during the demonstration and I must stress their involvement in looking for an optimal solution for the complex application we presented.
"Furthermore, we were all pleasantly surprised by the degree of efficiency of the machine, which would enhance not only the productivity of our lines but also the quality of the final products that we make."

Guaranteeing the total quality of the product

As could be seen during the conference, Sentinel II allows for uniform dispersal of the product on the infeed belt, which is scanned when it passes the cameras that are situated on both sides. A few milliseconds later, the defects are ejected by intelligent pneumatic ejectors, while the accepted products continue along their trajectory through the production line.

For example, the Sentinel II can reject defects such as rot, green stains, sunspots, and cross-contamination in potatoes, and at once eliminate foreign material such as cotton stalks, pieces of plastic, glass, animal matter, stones, and wood.

The technology can offer higher quality products at a lower cost, since the automation reduces both the need for operators to sort manually and down-time, while it increases productivity and minimises production declines. In addition, the Sentinel II is a tool that serves to ensure the total quality by allowing quality checks of 100% of the production and at high speed.

Tested and cost-effective technology of the Sentinel II

The Sentinel II optical sorter is designed to sort food including potatoes, tomatoes, peppers, and peaches. It uses the most advanced technologies in LED lighting and optical sensors to sort food in a fast and precise way based on colour, form, and size. At the same time, it guarantees the elimination of foreign material.

Validated on hundreds of applications, the Sentinel II covers a wide range of capacities of 8t/h to 45t/h for washed potatoes, which makes it a solution for both seasonal and year-round producers. It has a clear and easy-to-use user interface, which allows for the sorter’s configuration for rejecting a wide range of defects and eliminating many types of foreign material.

The Sentinel II can operate at low, medium, or high speeds, depending on the specific requirements of the product, and is available in three different sizes so that it perfectly fits and integrates in existing lines. The robust and stable design, high-efficiency, low-maintenance costs, and high data processing flexibility make the Sentinel II a cost-effective option for producers of different types of products, which can obtain a high productivity, total and stable product quality, and attractive return on investment.