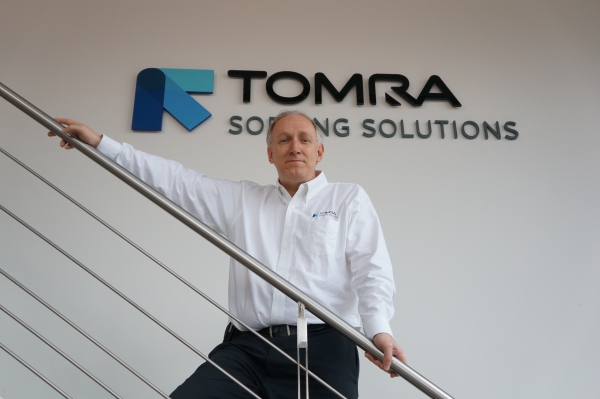 TOMRA Sorting executive vice president and head of sorting Dr Volker Rehrmann advised that the sorting business achieved order intake in the first-half of this year well above that in the initial six months of 2013. Dr Rehrmann commented that he was pleased with how the food sorting business has supported the overall sorting business growth.

Reacting to the performance, he said: "Overall, I’m pleased, considering the many activities we have merged since the acquisitions of ODENBERG and BEST."

TOMRA acquired unique patented technology and leading positions in several fast-growing food sorting and processing industry segments when it bought ODENBERG in 2011 and became one of the world’s leading food sorter suppliers and gained an expanded technology portfolio with the purchase of BEST sorting the following year.

Mr Hunter explains South America had been a good growth area for TOMRA Sorting Food during the first-half of 2013, while North American and European sales remained robust. Business in Asia continued to expand as more staff and resources were located there.

Explaining the strong performance, Mr Hunter said there were increasing signs of recovery from the worldwide economic recession of recent years.

He added: "End-retailers are also demanding much higher and more consistent quality levels but, of course, our customers’ options to increase prices are limited. Therefore the cutting of our customers’ costs is a big driver of our business, while they’re also understandably more demanding over things like removing foreign materials, identifying invisible defects inside and outside foods, applying real time control, delivering system reliability and maximising product yield. It’s impossible to achieve all that manually, but the sensor based systems we provide allow this.

"Another factor influencing the need for our products is the supply of labour. It’s not just the cost anymore with availability becoming an increasing problem. Urbanisation is reducing the number of people left to do manual sorting and control in areas where food is grown and processed.

"Also, businesses in emerging countries, as they move towards exporting, need the same levels of quality, safety and security as those in mature markets, so their desire to use the same type of processes and technology is driving our business there too."

Mr Hunter revealed TOMRA Sorting Food now supplies sorting equipment for more than 150 applications and is sold in more than 80 countries. He said the business had invested heavily during the first-half of the year at sites in nations including the US, Ireland, India, China and Belgium.

He added: "I believe this global breadth and being part of a large, strong, financially stable group allows us to cope with the ups and downs of individual territories and applications in a more balanced way. We can also supply machines with different technologies and sophistication, with our ability to use technologies from our sister recycling and mining businesses allowing us to put together unique products very quickly.

"Our size and scope also helps us to service our many customers who are multi-national, whose number will increase as China and other emerging markets develop.

"In addition, we’re very sensitive to the need for local management, delivering local market knowledge and speedy action. I’ve no doubt that being locally based gives customers a lot more confidence that we’re the right partner for them and that helps our success rate too."

Mr Hunter added this policy reflected TOMRA Sorting Food’s relentless focus on the customer, which he was determined to maintain and indeed focus on for continuous improvement.

Turning to personnel, Mr Hunter states the most significant appointments during the half-year had been those of Steven Van Geel, formerly market unit manager for tobacco, as sales director for China, and Sean Slevin as his counterpart covering other parts of Asia, particularly Japan, South Korea, Taiwan, the South East and India.

Mr Hunter said: "We’d previously treated China as part of the wider Asian continent but it requires a more focused approach. We’re very optimistic that having Steven based there will help grow the Chinese market faster for us."

He said new products launched in the first-half of the year included the Blizzard, representing TOMRA Sorting Food’s entry into the individually quick frozen vegetable market, the new biometric signature identification (BSI) technology and the Eco steam peeler, which have all been very positively received.