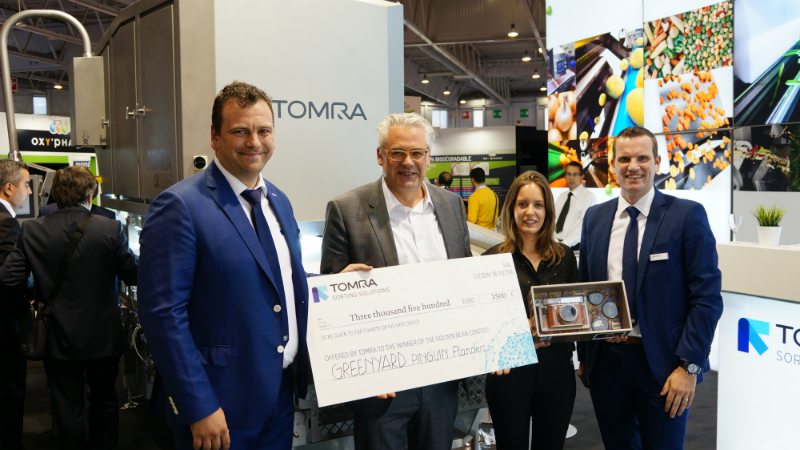 Greenyard Frozen has received a €3,500 charity voucher after winning a competition by TOMRA Sorting Food.

Formerly Pinguin Foods, Greenyard Frozen is a pioneer and market leader in fresh and frozen fruits and vegetables. The competition was held to celebrate the launch of the new TOMRA 5B, a state-of-the-art sorter for the vegetable, fresh cut, and potato processing industries.

Koen Crabbe entered the competition on behalf of Greenyard Frozen. The company chose Ruben Donné’s epic charity mission to sail from Belgium to Cape Town, and South Africa via Brazil as the recipient of the charity voucher.

The competition saw 20kg of green beans, one of them made of gold, processed by the TOMRA 5B. The person who came closest to correctly guessing the moment when the golden bean would be ejected was awarded with the voucher.

This voucher was presented to Greenyard Frozen’s marketing manager Sigrid Vanneste and general manager at the SIAL international food exhibition in Paris on 18 October.

Sales director EMEA at TOMRA Sorting Food Steve Raskin said: "We’re delighted that the voucher is going to support Ruben’s journey across the Atlantic and we thank everyone who took part in the competition."

"The competition was very well received and it demonstrated just how effective the TOMRA 5B is in identifying and extracting foreign material, while also showcasing our commitment to supporting our clients and worthy causes around the world."

Ruben Donné is undertaking his mission to raise funds and promote awareness for people living with Multiple Sclerosis, a condition his father suffers from. As part of the mission he hopes to arrive in Cape Town 60 days after departing from Belgium, and he will endeavor to sail 14,852km in a 6.5m sailing yacht.