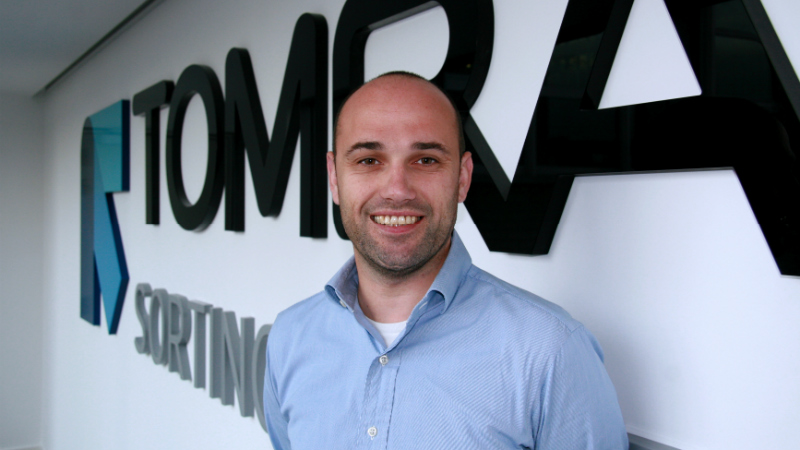 Head of product management at TOMRA Sorting Food Roel Molenaers has brought to attention research by the Food and Agricultural Organization of the United Nations (FAO), which predicts in order to meet the global population’s growing demand for food, worldwide food manufacturing and processing industries need to increase total output by 70% by 2050.

With a rise in the planet’s population by around 60 million people per year, food production efficiency is an issue that cannot be ignored.

There are several ways, each with varying degrees of difficulty, to enhance the efficiency of food production. These include tackling climate change, increasing the availability and fertility of land, and improving the supply of water. However, an important element of food production that must be addressed immediately is the further optimisation of crop yields as this will be a hugely significant factor in ensuring the 2050 target is met.

While tackling climate change, improving the quality and fertility of arable land, and supplying water will take time, increasing food sorting efficiencies is possible now. This can be done by utilising the latest available food sorting technologies and machines, which deliver greater yields, enhanced profitability for processors, and advanced knowledge from data, which can be used further along the processing line.

It is also important to recognize that, in addition to the demand for more food, the desire for choice and variety is also growing. This is especially the case in developing countries, which are adopting western, middle-class consumption habits such as the desire for a greater variety of food types and outlets.

As people move away from traditional home cooked meals, the demand for convenience food and ready-meals is increasing, bringing with it opportunities to benefit but also obstacles to overcome.

For instance, an average French Fried Potato plant produces 140.000 tons of product per year. By increasing yields by as little as 0.5% through modern sorting technologies and techniques, a processor could take an estimated 90 truck-loads off the roads (estimated on an average truck capacity size of 25t).

This action has positive repercussions for the environment as a whole and will increase the availability of raw materials, as well as boost profitability.

It is important to highlight that this principle can be extended and implemented in all areas of food production. This is especially relevant since the United States Department for Agriculture (USDA) recently claimed 31% of American-grown food was not available for human consumption at retail and consumer levels. With a commitment to yield optimisation, industries can help minimise this waste.

In terms of volume, the same report stated that over 51 million tons of food was lost in America. In monetary terms, this waste represented over $161bn (€145.3bn) as purchased at retail prices.

To help overcome this, the food sorting industry is investing in its technological development to ensure that efficiencies continue to be made. For example, the TOMRA 5B sorting machine is a system that not only sorts to customer specifications, but also provides an increasing supply of data and easy-to-interpret statistics, which can be used to improve future yields.

The ability to efficiently sort vegetables, potatoes, and nuts, which represent over 19% of the total amount of food wasted in the US alone, could have a huge impact. By increasing yields by just 1%, it is possible to increase the final amount of this type of produce in the US by 11 million tons. Apply this on a global scale and the 2050 food level objective starts to look more achievable.

The improvement in yield enhancing technology is not simply about ensuring food can be used for its initial purpose. It also identifies what produce can find its way into the food chain with an alternative use.

These improvements, as delivered by the TOMRA 5B sorting machine, will result in produce that would once have been identified as waste being recovered. A food type that does not make the grade for sale in its original form can be recouped for the creation of potato flakes, tomato sauces, or other alternatives. It can also be sold as a grade B product, ensuring that waste is reduced at every stage of the process.

Developments in technologies, such as a 360° surround view of the produce for optimal inspection, combined with innovative detection and rejection technology, results in more valid decisions about the quality of the product. This technological progress not only improves the quantity of food available, it also maintains the high-levels of quality expected by consumers who are increasingly interested in what they are purchasing.

Alongside this, the population growth of developing nations means that plans for improved yields in economies must be tackled sooner rather than later. This is especially so for those in Sub-Saharan Africa, which is expected to grow by up to 108%, according to the FAO.

The use of ever-improving technology to directly increase yields is a move in the right direction. However, the next generation of food sorting machines will be able to provide vital information, which will not only increase yields, but also look at improvements further down the production line and in future seasons.

If a food processor was to notice depressions in yield in a particular area of the process, results taken from the sorting machine could create a solution to easily identify and form actions earlier in the food growing process. Armed with this data, food processors are able to formulate plans to overcome present issues.

If the world is to meet the expected demands for food by 2050, and to make further improvements as the population continues to grow beyond that date, it must tackle the issue of improving yields quickly. By investing in sorting technologies and machines, food manufacturers and processors will be able to not only satisfy the need for increased volumes of product, but also increase their revenues.

To support this, food sorting technology developers will continue to refine their systems to enable greater access to increasingly accurate data and provide more capable machines to reduce waste to an absolute minimum.

The outlook should be regarded as a positive one. The assistant director general of FAO Hafez Ghanem said that his organisation is "cautiously optimistic about the world’s potential to feed itself by 2050". With continued developments in food sorting technology, it has every reason to be.