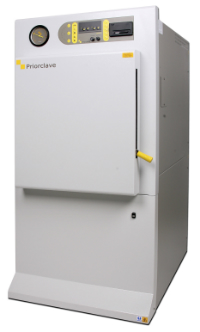 Priorclave has released the QCS H150 front-loading autoclave, which has a combination of secure key-lock and one touch push button controls, making it one of the safest and most efficient autoclaves available.

The 150l laboratory autoclave has a stainless steel, 500mm diameter sterilising chamber accessed via a wide door opening that allows easy loading of heavy loads, which may be delivered direct by trolley.

Precise control of the sterilising process is enabled through single push-buttons on the Tactrol 2 microprocessor control panel.

One touch controls enable the user to easily step through settings of temperature and time in accordance with HSE prescribed sterilising parameters for a specified load.

In addition to guiding laboratory personnel through programming, the advanced Tactrol2 microprocessor also keeps a log of the sterilising cycle data such as temperature, pressure and time.

Data is held in an archive file, which can be subsequently downloaded onto a USB flash drive and sent to the service team at Priorclave’s UK manufacturing centre.

Technical staff will analyse data to help fine-tune the autoclave for maximum efficiency.

An advantage of the Priorclave H150 autoclave is the secure key-lock switch on the front of the control panel, which governs access to certain parameter settings.

There are three levels of authorisation. Pre-set is the basic setting, intermediary allows adjustment of cycle times and temperatures, and the third setting is a master level, which allows other performance settings to be activated such as accelerated cooling and media warming.

This prevents cross contamination within the laboratory.

The QCS front-loading autoclaves will appeal to laboratory managers in industrial sectors such as food, drink, pharmaceutical and healthcare, as well as research establishments for sterilising applications such as media preparation, liquids and diluent, waste, glassware instruments and apparatus that need superior cleaning.

There may also be an added benefit of lower overall running costs associated with reduced power and water usage.