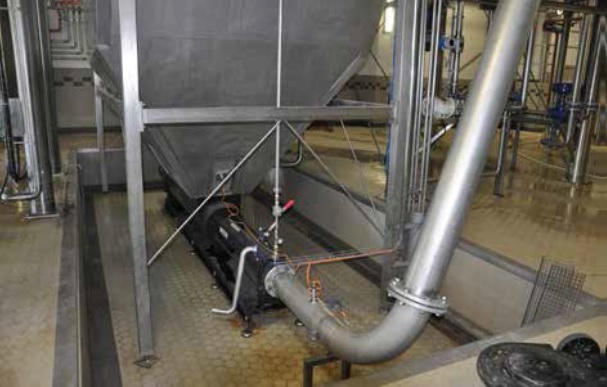 At a brewing company in Pennsylvania in the US, the brewmasters turned to reliable NETZSCH NEMO® progressing cavity pumps for the difficult jobs of moving spent grain and yeast through the brewing process.

In 1996 two friends with a passion for brewing quality beer opened the doors to the Brewing Company, a bar, restaurant and brewery in Downingtown, Pennsylvania. It has seen fast growth and has been a leader in the craft beer movement in the United States. The brewery in Downingtown now produces over 93,000 barrels of quality craft brews, with names like HopDevil, Golden Monkey, Old Horizontal and Summer Love Ale.

More recently the company has opened a second, state-of-the-art brewery in Parkesburg, Pennsylvania. The 19,700m&sup2; building features a German-built brewhouse with a pro-duction of about ten brews a day for an annual output of approximately 225,000 barrels.

For a brewery with such high demand for its premium beers, the company needs pumping equipment of the highest reliability, maintainability and service life. Brewers of all sizes rely on NETZSCH NEMO® progressing cavity pumps to keep production moving.

The vice-president of brewery operations said: "After all of the extract has been taken out for brewing beer, the remaining material, the spent grain, including spent hops, is a very high-moisture product. We used this type of NETZSCH pump for the same application in our Downingtown facility. We have experience with these pumps, they just run, so it made sense to install the same pump technology in our new Parkesburg brewhouse.

"To this point, we have done no maintenance on the NETZSCH pump in the Parkesburg brewhouse. We just let it run. The same NETZSCH pump that conveys spent grain in our Downingtown facility ran for four or five years before the stator needed replacing."

The owners of the brewery both studied at an famous Academy for brewing in Bavaria, Ger-many, known worldwide for training leading brewmasters. In an interesting geographical twist, the Academy is near NETZSCH headquarters in Bavaria. So, the founders of the Company have combined their Bavarian education with Bavarian-engineered pumps made in Pennsylvania for a fast-growing Pennsylvania brewery.