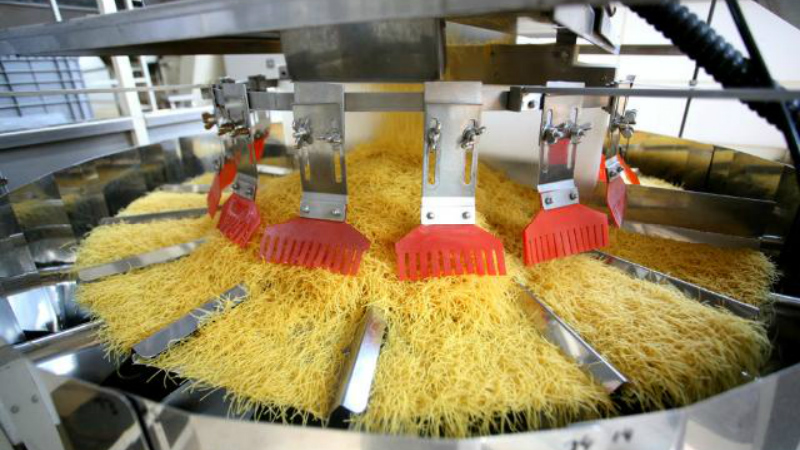 Ishida’s multihead weighing technology is versatile and is able to pack all types of dried pasta for Austrian company Recheis Teigwaren, whatever its shape or fragility.

Pasta produced by Recheis comes in many shapes and sizes. For example, curly vermicelli is a challenge to weigh accurately due to its tendency to clump together. The company also produces Hörnchen, an Austrian specialty that has curved tubes. In contrast, penne and farfalle are particularly delicate varieties, which require gentle handling to maintain their quality.

The Ishida multihead weighers on Recheis’ eight highly-automated packing lines can be quickly programmed to handle virtually any of its pastas, whatever size, shape, or fragility. The weigher’s vibratory system adjusts itself automatically to match the flow characteristics of the pasta being handled. To keep breakage of delicate varieties to a minimum, hoppers feature a special lining while discharge chutes are fixed at a shallow angle. These built-in features not only ensure a gentler transit, they also reduce factory noise.

Further increasing the versatility of its packing lines, two of the eight Ishida multiheads are 16-head machines, which work as two separate eight-head weighers. Each is coupled to its own bagmaker. Both weigher halves then work independently so when film has to be changed for one bagmaker the other can carry on working, adding value to the operation.

Usually eight-head multihead weighers would not be accurate enough for Ishida’s high-precision standards, as the number of hopper combinations for the target weight would not allow for sufficient weighing accuracy. However, as both 16-head machines are fitted with a set of booster hoppers, each eight-head weigher section effectively works with 16 hopper combinations, enabling it to select and combine its optimum weight to two independent packing lines.

As producer of Austria’s best-selling pasta branded Recheis Goldmarke, the family-run business ensures its packs have an authentic and craftmanslike appeal. For instance, its clip-on closures are not only practical but also have a homely feel. In order for the packing machines to correctly position these closures, the maximum weighing speed required is 50 per minute, which the multiheads could readily exceed if required. Weighing accuracy is so good that product giveaway is close to zero.

Each packing line is operated by a single person, controlling the multihead weigher via its colour touch-screen monitor. Preset parameters mean changeovers from one product to another are fast and simple. Complete cleaning takes just 30 minutes per weigher.

For a quarter of a century, Ishida multihead weighers have done everything Recheis demands of them, operating dependably throughout two shifts daily, year after year.

"Subsequently, we have had no need to change suppliers, since the equipment is very reliable and operating procedures are consistent from one generation of machines to the next. Ishida also scores highly in terms of long-term availability of spare parts and of service."

Recently, an Ishida weigher bought in 1987 was replaced. After 25 years of constant use, it was still fully functional, but a weigher with larger hoppers was needed in order to handle new catering packs. Naturally, given Recheis’ positive experience, the replacement was another Ishida machine.