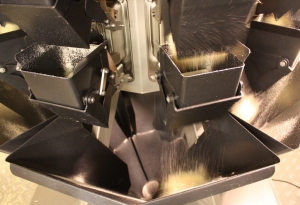 Bringing its customers the taste and aroma of the finest quality cheeses in convenient, ready-to-use formats has underscored the success of cheese packing leader in Russia PiR-PACK – and the ability to deliver this convenience is thanks in part to the flexibility, reliability and accuracy of an Ishida multihead weigher.

The Ishida 10 head model of its market-leading CCW-R range is playing a critical role in the production of many different pack sizes of a wide variety of grated, granulated, flaked and cubed cheeses. The weigher’s versatility, thanks to its special contact parts, means that it is able to handle all types of cheeses, everything from ‘wet’ varieties such as Mozzarella to light and fragile ones such as Parmesan.

PiR-PACK was one of the first companies in Russia to develop the market for the grating and packing of solid cheeses and in just seven years has established itself as Russia’s largest supplier, offering its wide range of products to both the retail and foodservice sectors. Today PiR-PACK has six packing lines capable of producing around 1,000t of cheese each month in many different pack weights from 25g to 5kg.

The company prides itself on its knowledge and understanding of the market and its ability to respond to customer demands and market developments. Recognising the increasing popularity of pre-packed ready cut cheeses, the company installed a new modern line at its factory in Moscow featuring the latest equipment. Alongside the Ishida weigher, this comprises a cutting machine, conveyor, grater and vertical flow packer, together with a metal detector for final quality check after packing. The cheeses are packed at weights varying from 75g to 1kg.

"We have been very impressed with the weigher’s ability to handle cheeses with many different characteristics."

The Ishida weigher is unique in the Russian market as it is the first of its kind in the country to feature Ishida’s special Teflon coating, which ensures that all cheeses are able to move easily throughout the weigher without sticking or clumping together. This maximises both the speed and accuracy of the weigher.

"We have been very impressed with the weigher’s ability to handle cheeses with many different characteristics," says Vadim Molodtsov, deputy general manager of PiR-PACK. "Even a very wet variety such as Mozzarella causes it no problems."

The flexibility of the weigher also extends to its ease of use with factory personnel reporting that it is simple and comfortable to operate. Different products and pack weights can all be pre-set and then simply called up via the user-friendly touch screen. Just as important, this flexibility means PiR-PACK can very quickly respond to market changes and demands with new products and different pack weights. And it goes without saying that the legendary Ishida accuracy applies to all pack sizes.

"For our production requirements, weight accuracy and flexibility are absolutely vital," confirms Mr Molodtsov. "The Ishida has fully met our expectations in this respect and, in particular, the ability to easily change target weights for the packs is a significant competitive advantage to us."

Another benefit for PiR-PACK is the machine’s hygienic design and easy-clean features.

"Effective hygiene is absolutely vital," confirms Mr. Molodtsov. "We conduct a full line cleaning exercise after each product changeover. As we know cheese is a ‘live’ product, that’s why the question of disinfection is really important. All contact parts are easy to remove and replace and the weigher can be hosed down, meaning that it is thoroughly cleaned but downtime is kept to a minimum."

Certainly the reliability of the Ishida has meant that the majority of downtime since its installation has simply been for changeovers, or cleaning. "Since purchasing the machine, we have had no serious breakdown," says Mr Molodtsov. "This is further proof of Ishida’s unparalleled quality."

In selecting the Ishida weigher, PiR-PACK carried out a thorough investigation of available suppliers and then had the opportunity to assess the Ishida equipment first-hand, thanks to the company’s participation at many of the major European food and packaging exhibitions.

"Ishida is recognised as the market leader in multihead weighers and the fact that this particular model is specifically tailored to the requirements of cheese weighing was a critical factor in our decision," concludes Vadim Molodtsov.

"Ultimately the appropriateness of any equipment can only be judged by its performance each day and in this respect we have never had to question or regret our decision to purchase the Ishida weigher."