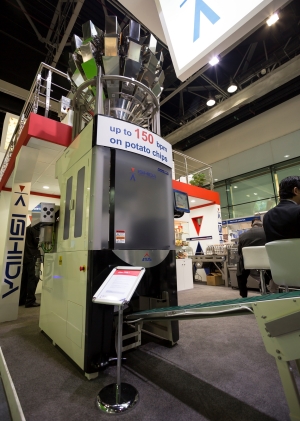 Focusing on some of the major areas where the company enjoys global market leadership, including weighing and sealing equipment and quality control systems, the Ishida Europe stand at Total Processing and Packaging will demonstrate how automation and integration can deliver improved efficiencies, maximum throughput and fast return on investment.

Highlights on the stand will include the UK exhibition début of Ishida’s latest multihead weigher model, which is due to be officially launched in May. Also making its first appearance will be a new semi-automatic tray sealer, alongside latest developments in X-ray and checkweigher technology as well as a high-performance snack food packing system.

Quality control solutions on display include Ishida’s latest checkweigher, the DACS-G, which features a new Ishida-designed, exceptionally fast and accurate loadcell that is able to operate with great reliability in the harshest of environments. It can also switch between two weighing capacities to allow a larger product range to be packed on one line.

The DACS-G will be demonstrated using Ishida’s just-launched IDCS II (Ishida Data Capture System). This advanced system provides powerful data monitoring and analysis for every pack that goes across the checkweigher in order to help improve overall equipment efficiency (OEE), monitor packing line performance, enhance the profitability of production lines and generally enable food packers and processors to manage their operations more efficiently. Ishida says that its new IDCS II can typically pay for itself with only a few weeks of use.

Also on show, Ishida’s high-performance IX-GA X-ray technology can reliably detect even tiny amounts of foreign bodies down to 0.3mm in size, such as steel, aluminium, tin, glass, stones, hard rubber, plastic, some bones and shell. In addition, the machine incorporates Ishida’s unique genetic algorithm (GA) technology which enables any operator to ‘train’ the X-ray system for greater sensitivity to specific contaminants. It can also spot missing, undersized and mis-shaped items or damaged products and the software allows product masking and weight estimations.

The iTPS™ – Ishida Total Packaging System – is the world’s fastest and most accurate complete snack food packing system where all the major elements come from one supplier. Shown with Ishida’s advanced Atlas high speed, high-efficiency snack food bagmaker, Ishida multihead weigher, throat metal detector and printer, and available with seal tester and checkweigher, the fully integrated system delivers near-zero product giveaway at speeds of up to 250 bpm for extruded snacks and up to 150 bpm for potato crisps (using its unique charge transfer control system (CTC).