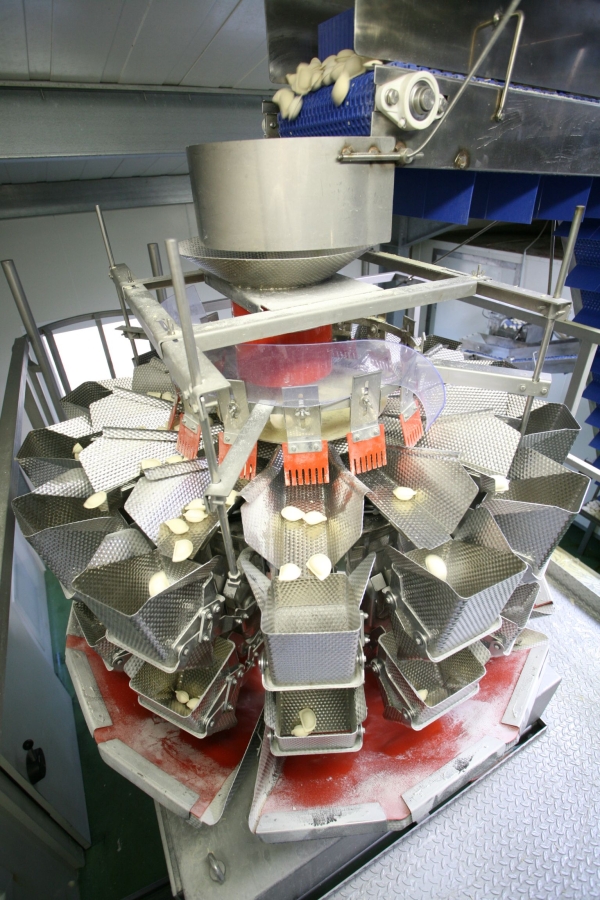 Monolith Fleisch und Teigwaren sells speciality foods, such as Russian-style filled dumplings, known as Pelmeni. Originally, the dumplings were fed into a bagmaker via a linear weigher. The accuracy was not ideal, but the main problem was the low speed, which meant the packing process was being bottlenecked, and adding more weighers of the same type was not an option because of space constraints.

Ishida’s solution was to install a modern Ishida multihead weigher as a drop-in replacement for the linear model, leaving the rest of the line in place. This has doubled production output from eight tonnes to 16t of Pelmeni per day.

In order to achieve high speeds, while maintaining the quality of the fragile frozen Pelmeni, the 14-head weigher is fitted with a number of measures to cushion the pasta parcels on their path through to the bagmaker.

Brought to the top of the weigher in a flighted elevator with plastic contact parts, they are channelled via a funnel and a plastic collar onto the plastic-coated dispersion table.

On exiting the weigh hoppers, the dumplings, each weighing about 13g, are prevented from colliding with each other by a shock-absorbent plastic pole suspended in the discharge chute, which is plastic-lined.

Another important contributor to productivity has been the increase in yield, associated with the superior accuracy of the Ishida weigher.

The weigher is also designed to enable thorough cleaning while keeping associated downtime to an absolute minimum, further boosting production. Contact parts can be lifted off and, once cleaned, dropped back into place without any tools. The three litre hoppers are interchangeable, as are the radial feeders. Individual hoppers can be removed and replaced during operation without materially affecting accuracy.

A further, but less expected benefit of the new Ishida weigher, is the effect on the range. While production was held back, product innovation had to take second place to satisfying the demand for core products. Now, the site is producing more than 20 varieties, including exotic versions such as quark or strawberry-filled dumplings.

Kray added: "Before the modernisation, the introduction of new products inevitably took place at the expense of the standard range.

"Thanks to the Ishida machine, we have become much more flexible."