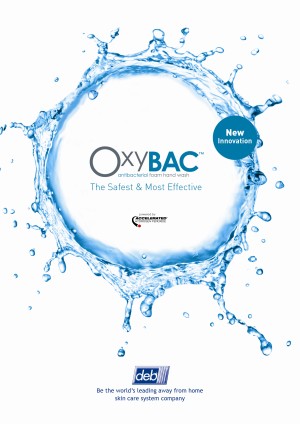 Hands are recognised worldwide as one of the most common vehicles of contamination within the food industry. Dangerous pathogens can be picked up by food handlers handling raw meats, bins, dirty equipment, door handles, phones and even computer keyboards. There is also an inherent risk of the spread of pathogens by the hands of food handlers who are, or have recently been sick with food borne disease, where the carriage and spread of very low numbers of some bacterial cells and foodborne viruses are enough to infect the consumer. It is no surprise therefore that good personal hygiene, and in particular, effective hand-washing, forms one of the most important HACCP pre-requisite controls. Good hand-washing relies on good technique, warm water and effective soap.

Richard Mallett, Director of the HACCP Europe Division of HACCP International, and microbiologist, was delighted when global skin care company, Deb Group, approached HACCP International to certify the food safety characteristics of the recently launched OxyBAC foaming soap. Deb Group wished to endorse their claim that OxyBAC is a safe and effective antibacterial hand wash for use in any food handling environment, where higher standards of hand hygiene are required. HACCP International were selected as the equipment and materials certification body to do just this.

Professional use, liquid antibacterial hand washing soaps have been available for over 50 years. Their use has increased in response to public concerns over the spread of infectious diseases and the need for greater vigilance in hygienically sensitive environments, such as where raw and uncooked foods are being handled. This has led to greater emphasis on germ-kill performance and the introduction of stronger biocides. With this change, more has been learned about the impact that the biocidal agents used in antibacterial soaps have on hand hygiene, human health and the environment.

The second concern is human toxicity, as many biocidal agents are known irritants and sensitisers; their frequent use can lead to skin irritation, allergic reactions and sub-optimal hand hygiene compliance.

Finally, the third concern is anti-microbial resistance, where the mode of activity, residual toxicity and wide use of some biocidal agents has led to concerns of micro-organisms building-up resistance against them.

OxyBAC combines Deb Foam Technology with Accelerated Hydrogen Peroxide (AHP) to create a unique, patented non-ionic surfactant based rich-cream foam that addresses the concerns of all existing biocidal actives. Dr John Hines, R&D Director at Deb explains "the active power of OxyBAC is hydrogen peroxide which, unlike all other biocidal actives, has the unique benefit of simply breaking down into water and oxygen after use with no environmental or human toxicological impact. Also, when AHP comes into contact with germs it releases free-radicals which act non-specifically on multiple cell targets to kill germs in such a manner that prevents antibacterial resistance".

Deb’s R&D team have been working for over eight years to perfect the science of incorporating AHP into a foaming hand wash formula that apart from being highly efficacious also has an excellent physical cleansing performance, with good skin feel during and after use.

Dr Pierre Grascha, Chief Scientist at Deb explains: "the powerful oxidising action of hydrogen peroxide has long been known for its antiseptic germ-killing properties, but the challenge has been to stabilise it in a synergistic blend of commonly used, safe ingredients that both kills and cleans whilst being safe for the environment and the user. Using internationally accepted protocols, independent test laboratories have shown that OxyBAC will kill 99.999% of many bacteria in just 30 seconds, which is truly exceptional for a hand wash product."

HACCP International performed an in-depth product and facility evaluation to establish and verify the claims that Deb Group wanted to make for OxyBAC. This involved an inspection of production facility site standards, raw material batch, processing and packaging controls, toxicity, and efficacy, labeling and marketing claims. On receiving certification Deb Group European Marketing Director Paul Blount and R&D Director John Hines were both delighted. Said Paul: "HACCP International Certification now paves the way for Deb Group to satisfy the stringent demands of technical managers and buyers within the food industry who are under immense pressure to ensure that equipment and materials, as well as foodstuffs, are well controlled and will not present a food safety risk to their operation. That is a need which is demanded by food hygiene legislation and by global codes of practice such as the British Retail Consortium, Global Food Safety Standard. Deb Group are proud to be able to help them to meet this need".