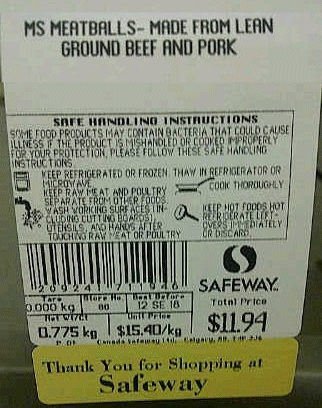 Canadian meat company XL Foods is recalling a number of ground beef products that were sold at major grocery stores in several provinces in Canada as they may be contaminated with E. coli O157:H7 bacteria, according to the Canadian Food Inspection Agency (CFIA).

Other products that are being recalled include Beef Bearpaw Burger and Calahoo Meats branded burgers.

There have been no reported illnesses linked to the consumption of these products.

CFIA said that this voluntarily recall is a part of its ongoing food safety investigation, and it is working with the recalling firms and distributors to identify and verify all affected products.

Consumption of food contaminated with E. coli bacteria can lead to diarrhoea, dehydration and, in the most severe cases, kidney failure, and it can cause serious illness in very young, elderly, and those with weak immune systems.

Image: The beef products from XL Foods were sold at major grocery stores across Canada including Safeway, Walmart, and Costco. Photo: CFIA.