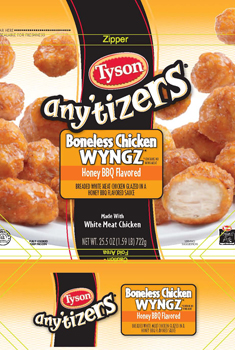 US-based Tyson Foods is recalling 67,269lbs of boneless chicken products due to misbranding and undeclared allergens, according to the US Department of Agriculture’s Food Safety and Inspection Service (FSIS).

These products were produced on 7 August and 8 August 2012, and were distributed to retail stores nationwide.

The recall has been classified as Class I, which indicates a health hazard situation where there is a chance of serious, adverse health consequences or even death due to the consumption of the products.

Tyson Foods was informed of the problem through consumer complaints.

FSIS and Tyson Foods have not received any reports of illnesses linked to the consumption of these products.

Consumers concerned about a reaction have been asked to contact a healthcare provider.

Individuals allergic to milk, soy or egg have been advised not to consume the product as they could experience serious reactions.

Image: The recall of boneless chicken products by Tyson Foods has been classified as Class I, which indicates a high health risk. Photo: courtesy of FSIS.