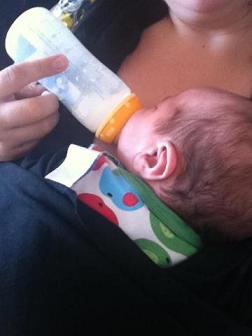 Researchers at the University of Illinois, US, have a developed new method that uses bacteria to artificially produce 2-fucosyllactose (2FL), a sugar found in human milk.

This development could lead to future research on the possibility of its addition to infant formula, say researchers.

2FL is an oligosaccharide, which is found in abundance in breast milk and is believed to help strengthen the immune system of babies.

The new method uses a modified E. coli strain to synthesise the 2FL.

Study researcher, Yong-Su Jin, said that as E. coli makes a starting material for 2FL as part of its normal metabolism, they decided to use the strain to produce the sugar.

"And we can use this technique to synthesise and study the hundreds of other HMOs in human milk too," added Miller

Using the new technique, the University plans to initiate a study evaluating the role of 2FL in infant nutrition and also assess whether it can be added to infant formula.

In addition to the ingredient’s use in baby formula, the researchers suggest that it could be used to prevent Campylobacter contamination in chicken.

Lead researcher, Michael Miller, said that if poultry feed containing 2FL is fed to the chicken, the pathogens would bind to the oligosaccharide instead of the mucosal lining of the bird’s intestine and the pathogens can be destroyed even before the chicken reaches retail outlets.

Image: The development of artificially produced 2-fucosyllactose could lead to future research on its addition to infant formula. Photo: courtesy of Smmchapman.