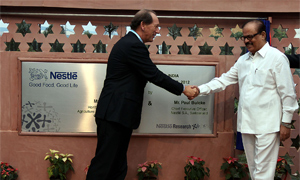 Swiss food company Nestlé has opened its first research and development (R&D) centre in India with an investment of CHF50m ($53.02m) in order to gain a greater understanding of Indian consumers, traditional ingredients and local cuisine.

Located in Manesar, close to Nestlé India’s headquarters in Gurgaon, Haryana state, the centre will focus on Asian noodles and Indian cooking, while seeking to develop nutritious, affordable products in serving sizes that are suitable for lower income consumers.

Nestlé’s chief executive officer Paul Bulcke said the new R&D centre in India will enable the company to gain greater expertise in using and processing local ingredients to develop products for India and beyond.

"As with all Nestlé’s R&D centres, it will be part of our worldwide R&D network, enabling us to acquire local knowledge and use it on a global scale," Bulcke added.

"As with all Nestlé’s R&D centres, it will be part of our worldwide R&D network, enabling us to acquire local knowledge and use it on a global scale."

The centre will offer technological knowledge in food processing and manufacturing, and provide expertise in consumer science as well as in extrusion – a process that is used to give foods a specific shape or texture.

In addition, it will form scientific partnerships with local universities and research institutes in India, to expand Nestlé’s existing knowledge base and promote innovation.

Nestlé noted that researchers at the centre will gain understanding in the use of local ingredients and culinary traditions, which is expected to help in the development of new product ideas.

The company plans to expand its range of mainstream products in the country, especially in the noodles, cereal, beverage and dairy segments.

Indian Minister of State for Agriculture and Food Processing Industry Tariq Anwar said the centre will promote the development of nutritious and tasty products that will benefit consumers irrespective of their income levels.

Nestlé, which currently has 32 R&D centres worldwide, said this investment is part of its long-term plan to strengthen its R&D capability in emerging markets.

In October 2012, the company announced its plans to set up two R&D units in China, one in Dongguan and the other in Xiamen.