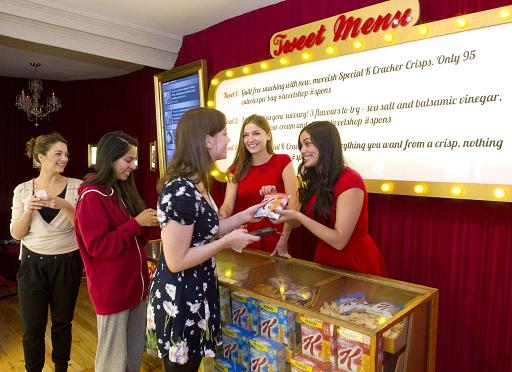 US-based cereal producer Kellogg has opened the world’s first Tweet shop in London, UK, where consumers pay by Tweet instead of money, as part of its plan to promote its Special K brand Cracker Crisps.

The Tweet Shop encourages consumers to pay for a packet of Special K Cracker Crisps by sharing a message about the snack range on Twitter, an online social networking service.

It is staffed by women in red dresses, representing the Special K brand, who check each customer’s Tweet before offering a packet of crisps.

This move not only marks Kellogg’s foray into the UK savoury crisps market, but also its first venture into the retail segment with a dedicated physical space.

Special K brand manager Sarah Case said positive feedback on social sites is extremely valuable, and so Kellogg is excited to be the first company to use social currency instead of financial currency to roll out the new product in the Special K shop.

"This is big news for Special K and we are hoping the brand’s move into crisps and the high street will create a major buzz on and offline," Case added.

The Tweet Shop, located at Soho’s Meard Street, is open from 25 September to 28 September, between 9am and 5pm.

It stocks hundreds of packets of crisps and features a ‘try before you buy’ snacking area and a ‘community notice board’, which displays social media reaction to the new retail space.

Special K Cracker Crisps are a low-calorie savoury snack, offering less than 100 calories per pack, and are available in sea salt and balsamic vinegar, sweet chilli, and sour cream and onion flavours.

Image: Kellogg’s Tweet Shop encourages consumers to pay for a packet of Special K Cracker Crisps by sharing a message about the snack range on Twitter.