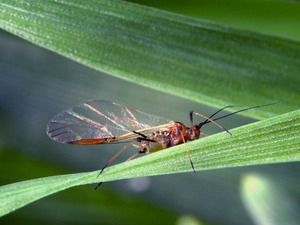 Scientists at Rothamsted Research in Hertfordshire, UK, have developed a genetically modified (GM) wheat that emits odour to repel aphids, in an effort to control the use of pesticides.

The wheat variety releases a chemical known as E-beta-farnasene, which is naturally produced by aphids to alert each other of imminent danger.

It is considered to be the world’s first GM crop that repels pests instead of killing them, lowering their likelihood of developing immunity to pesticides.

Aphids, which include greenfly and blackfly, have long been the bane of farmers: according to estimates, aphid attacks cause over £120m worth damage every year to wheat

Wheat is one of the major cereal crops in the UK with an annual production of 15 million tonnes, valued at £1.2bn.

To develop the GM wheat, the scientists used a perppermint plant, which also produces the E-beta-farnasene, though not in enough amounts to repel the pests.

The scientists removed a gene that releases the chemical, known as E-beta-farnasene, from a mint plant, inserted it into the wheat crop, and manipulated it so that it is released in enough quantities to ward off the pests.

In a trial conducted at the Rothamsted Research laboratory, the wheat variety released enough chemical to repel 80% of the pests.

"In this case what we are really doing is putting a no-parking zone on the leaf of the plant saying ‘dont’ come here," Moloney added.

The odour is so mild that it cannot be smelled by humans and also has the advantage of attracting parasitic wasps which feed on aphids.

The small scale trial, which received funds of £900,000 from the government, is being tested this year and into 2013.

Image: Aphid attacks cause over £120m worth damage every year to wheat in UK. Photo: Rothamsted Research