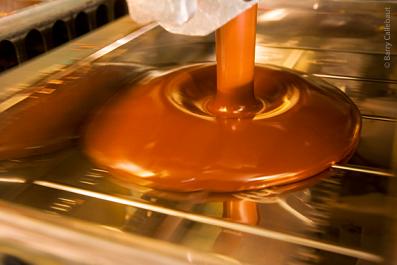 Swiss chocolate manufacturer Barry Callebaut has agreed to supply up to 16,000t of chocolate and compound products annually to Japanese confectionery manufacturer Morinaga over the next ten years.

The companies will also strengthen their cooperation in the field of research and development (R&D) and plant to jointly develop new products.

Morinaga president Masayuki Yada said that by outsourcing chocolate production to Barry Callebaut, the company can concentrate its resources on R&D and marketing of consumer-chocolate.

Barry Callebaut plans to invest CHF18.5m (19.4m) over the next year and will close its plant in Amagasaki, near Osaka, by mid-2013 to build a new chocolate and compound factory in Takasaki, where Morinaga plans to strengthen its presence.

The Swiss chocolate maker will shift the complete operations of the Amagasaki plant to the new plant in Takasaki, boosting the total production capacity.

From the new location, Barry Callebaut plans to gradually increase its volume of sales to third-party industrial and gourmet customers in Japan. In addition, it plans to strengthen its sales organisation in Japan, enabling it to enter new markets.

"Barry Callebaut plans to gradually increase its volume of sales to third-party industrial and gourmet customers in Japan."

Barry Callebaut CEO Juergen Steinemann said that from the new location the company can cater to Morinaga’s chocolate needs and boost sales volume for third-party customers.

"This will further strengthen our position in one of Asia’s most important chocolate market," Steinemann added.

The new agreement marks the extension of the ten-year strategic partnership signed by the two companies in 2008, when Barry Callebaut agreed to supply 9,000t of products a year to Morinaga, following which it opened a chocolate production facility in Amagasaki.

Barry Callebaut currently owns and operates three chocolate facilities in Singapore, China and Japan, as well as a combined cocoa and chocolate plant in Malaysia, where the company’s Asia-Pacific head office is located.

Image: The renewed chocolate supply agreement between Barry Callebaut and Morinaga marks the extension of the ten-year strategic partnership signed by the two companies in 2008. Photo: Barry Callebaut