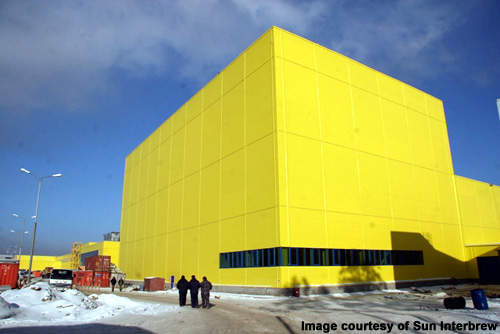 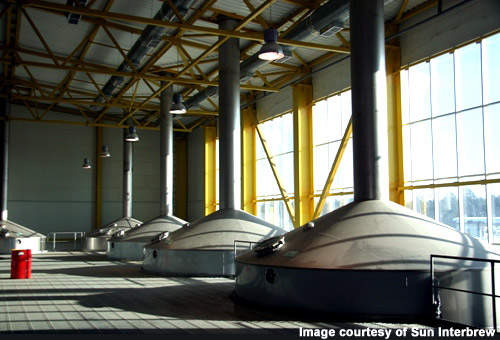 Krones have provided much of the equipment. 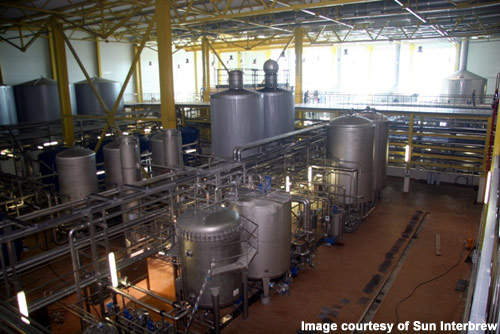 The brewhouse now needs to be commissioned to achieve its full production.

Sun InBev is an Eastern European subsidiary of InBev (now Anheuser-Busch InBev), a joint company formed between InBev and the Sun brewery in Russia. Formed in 2004 from a merger between the Belgian company Interbrew and the Brazilian company AmBev, InBev is the largest brewer in the world, employing about 86,000 people.

In July 2008 InBev made a bid to buy the US brewer Anheuser-Busch for $52bn in cash. After the approval of shareholders from both the companies, the acquisition was completed in November 2008. InBev purchased all the shares of Anheuser-Busch for $70 per share. After completion of the acquisition, InBev was renamed Anheuser-Busch InBev. The deal created the world’s largest brewer, uniting major brands such as Budweiser and Michelob with Stella Artois, Bass and Brahma under the same company banner.

The resulting combined sales have overtaken SABMiller of London as the world’s largest brewer.

Sun InBev commenced the greenfield brewery construction project in Angarsk, Irkutsk, Russia, in 2006. It was opened in April 2009 with an investment of €150m. The project investment was initially estimated at €80m. Krones of Germany supplied the production equipment for the brew house and filling facility and Omus-1 of Russia was the general contractor. This is the first brewery the company has built from scratch in the country. It employs around 265 personnel, of which 95% are local residents. The actual production capacity of the plant is 1.8 million hectolitres. .

“The new capacity in Angarsk is used to produce the national brands of the company.”

The new capacity in Angarsk is used to produce the national brands of the company – Sibirskaya Korona, Klinskoye, Tolstayk and BagBier. The construction of the new brewery was intended to satisfy the increasing demand for beer in the Central, Eastern Siberia and Far East regions of Russia.

Russian beer sales have achieved a level of nearly eight million hectolitres a year, and although growth is expected to slow in the coming years as regulators clamp down on marketing because of health fears, rivalry between the major brewers remains intense.

The brewery is Sun InBev’s eastern-most production facility of the company in Russia. Start of production has eliminated capacity shortage in the region and decreased the logistics costs.