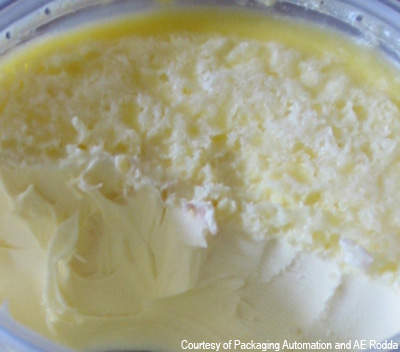 Clotted cream is a rich luxury product synonymous with Cornwall and Rodda's is known as a leading brand. 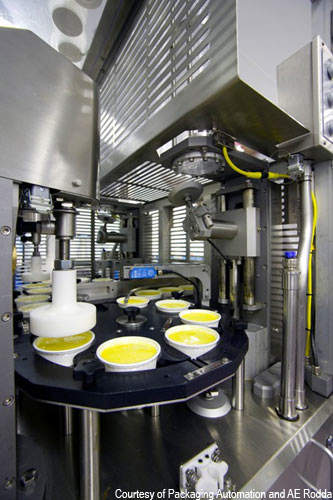 The Starwheel machine from Packaging Automation can apply lids at 100 pots per minute. 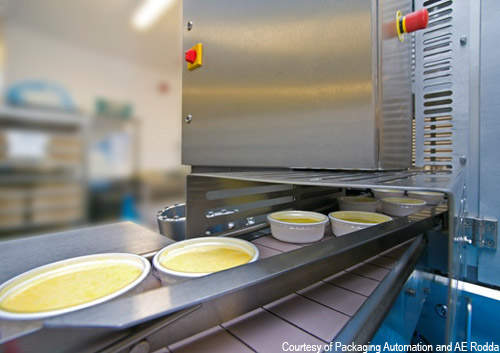 Rodda's clotted cream is packed in a polyethylene tub in one of many various sizes, which is sealed with a diaphragm and then has a lid clipped on top. 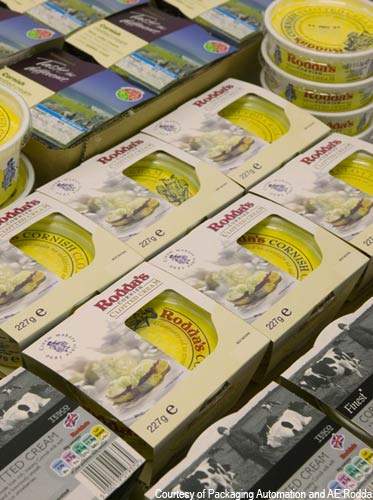 The Rodda's creamery offers a range of products, including clotted cream, crème fraîche and butter.

Perhaps one of the greatest pleasures in life is a really good cream tea and central to this, of course, is clotted cream. One of the most well-known companies for clotted cream is AE Rodda of Scorrier in Cornwall.

Rodda’s began producing clotted cream in its Cornish creamery in the 1800s and has not looked back since. Technology has helped the company produce and pack a product with superior keeping qualities as it is on every supermarket shelf up and down the land; there is no need to go to Cornwall to get the genuine article.

“The Starwheel is a filling and sealing machine and is able to apply lids to over 40,000 pots a day.”

The company supplies Tesco, ASDA, Sainsbury’s, Waitrose, Morrisons, Co-op and a range of other supermarkets.

With such success and production barely able to keep up with demand, it was no surprise that during June 2007 Rodda’s decided to install new high-speed packaging equipment from Packaging Automation. The company had already expanded production in response to new orders but the packaging was letting it down.

Rodda’s decided on a new filling and sealing machine for its clotted cream tubs. The product is usually packed in a polyethylene tub in various sizes which is sealed with a diaphragm and then has a lid clipped on top of this. This is to enhance keeping qualities; once it has been opened for the first time it can be resealed.

The equipment selected was a twin-lane Starwheel machine from Packaging Automation. The Starwheel is a filling and sealing machine from the volumetric range and is able to apply lids to over 40,000 pots a day, which for Rodda’s brings it into synergy with another line at a similar output level.

The machine was tested during the installation to its top speed of 100 pots per minute, but it is currently operating at a steady rate of between 70 and 80 pots per minute.

With the new machine on the filling and packaging line, customers now have the option of having the Starwheel supplied with fillers if required, and the machine offers a number of closure options including film feed and pre-cut diaphragms, as well as the usual clip-on overlids for the whole range of pot sizes (¼ pound, ½ pound and 1lb tubs).

Rodda’s also packages Tesco Finest and Sainsbury’s Taste the Difference ranges and for these the standard pack format might vary.

“Rodda’s products use only local Cornish milk and the company has access to the daily production of over 7,000 local cows.”

The Rodda’s modern creamery at Scorrier can produce 10t of clotted cream per day – as the company’s key product, clotted cream is one of Rodda’s main production demands. However, the company has also branched out and extended the ‘brand’ as a mark of quality to other products.

The company has introduced an organic line for the production of clotted cream and also produces other creamery products such as butter, liquid cream (single and double) and crème fraîche.

In a link-up with three other Cornish companies, Rodda’s also produces shortbread, fudge and ready-to-eat cream tea kits. Rodda’s products use only local Cornish milk and the company has access to the daily production of over 7,000 local cows on neighbouring farms.