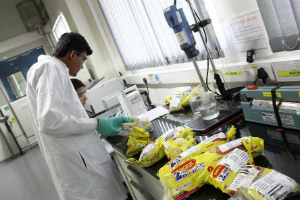 Nestle India has resumed production of Maggi instant noodles at three of its facilities, with the product expected to hit store shelves following clearance from food testing laboratories, as mandated by the Bombay High Court.

The firm intends to relaunch the product into the Indian market by November, reported First Post, citing a spokesperson of the Switzerland-based food group.

The spokesperson told the publication: "We have resumed manufacturing of Maggi Noodles at three of our plants, at Nanjangud (Karnataka), Moga (Punjab) and Bicholim (Goa)."

"All the 90 samples, covering six variants, tested by these laboratories are clear, with lead much below the permissible limits."

Nestle said: "We have received test results from all three laboratories mandated by the Bombay High Court to test Maggi Noodles samples. All the 90 samples, covering six variants, tested by these laboratories are clear, with lead much below the permissible limits."

Nestle has been struggling with the crisis after a nationwide ban was imposed on its Maggi instant noodles in June.

Stating that the noodles are safe for conumption, Nestle India said earlier this month that it has "conducted over 3,500 tests representing over 200 million packs in both national as well as international accredited laboratories and all reports are clear".

The company stated that it will continue collaborating with the Food Safety and Standards Authority of India (FSSAI), as well as other stakeholders.

The FSSAI banned the sale of Maggi noodles after it detected higher-than-permissible levels of lead, and high quantities of mono-sodium glutamade in tests carried out on a batch of products.