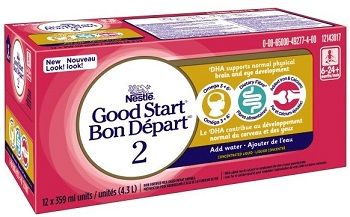 Nestlé has recalled its Good Start 2 concentrated liquid infant formula due to a problem with the minerals in Canada.

Canadian Food Inspection Agency (CFIA) stated that though some infants who consumed products from four recalled batches of formula have fallen ill, it is not confirmed if they fell ill due to consuming these products.

Following consumer complaints, the product has been recalled across the country.

The CFIA stated: "Consumption of the affected product could lead to lower intake of some nutrients due to reduced bioavailability."

"Consumption of the affected product could lead to lower intake of some nutrients due to reduced bioavailability."

Nestlé stated on its website it is ‘working with the Canadian Food Inspection Agency (CFIA) and is voluntarily recalling four batches of the product due to a quality issue.’

Nestlé added: "The minerals in the formula may separate over time and appear as black particles in the concentrate."

Batches that have been recalled are the ‘Good Start 2’ brand and its iron fortified milk-based infant formula, which are packaged in 359ml tetra boxes.