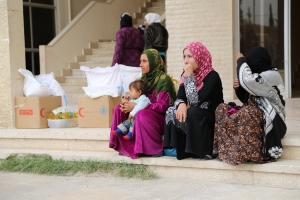 The United Nations World Food Programme (WFP) said that a funding crisis has forced it to suspend a programme that provided food vouchers to 1.7 million Syrian refugees in neighbouring countries.

Syrian refugees residing in Jordan, Lebanon, Turkey, Iraq and Egypt have been using vouchers given as a part of this programme to buy food in local shops.

WFP said that stopping this assistance would be devastating for the already struggling refugees.

Refugees in places such as Lebanon and Jordan are ill-prepared to meet the winters, with many children are said to be barefoot and without proper clothing.

WFP executive director Ertharin Cousin has made an appeal to donors saying: "A suspension of WFP food assistance will endanger the health and safety of these refugees and will potentially cause further tensions, instability and insecurity in the neighbouring host countries.

"The suspension of WFP food assistance will be disastrous for many already suffering families."

"The suspension of WFP food assistance will be disastrous for many already suffering families."

The organisation currently needs around $64m immediately to support the refugees for the month of December. WFP will only be able to continue their assistance in case of fresh funding in December.

WFP has invested roughly $800m since the operation began.

WFP regional emergency coordinator for the Syria crisis Muhannad Hadi said: "We are very concerned about the negative impact these cuts will have on the refugees, as well as the countries which host them. These countries have shouldered a heavy burden throughout this crisis."

Since 2011, when the Syrian conflict erupted, WFP has provided food to millions of displaced people inside Syria and up to 1.8 million refugees in the neighbouring countries of Lebanon, Jordan, Turkey, Iraq and Egypt.

Image: Syrian refugees residing in Jordan, Lebanon, Turkey, Iraq and Egypt have used the vouchers from the programme to buy food from local shops. Photo: courtesy of WFP/Dina Elkassaby.