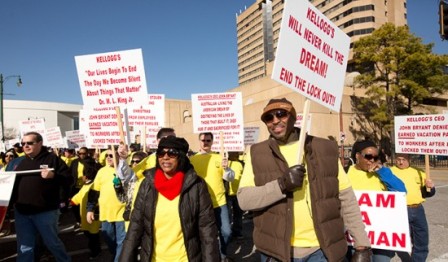 A federal judge of the Western District of Tennessee has issued an injunction ordering the Kellogg Company to cease its lock out of 226 workers at a cereal production facility in Memphis, Tennessee, US.

Judge Samuel Mays has ordered the company to reinstate them in their jobs within five days.

All of the affected workers are represented by Bakery, Confectionery, Tobacco Workers and Grain Millers, International Union (BCTGM) Local 252G.

The judge also ruled that the company is to reinstate the workers to their former pay level and working conditions.

BCTGM international president David Durkee said: "A federal judge agreed entirely and unequivocally with the union and the National Labor Relations Board. Judge Mays rejected each and every argument Kellogg has made since this dispute began.

"Our members and their families have been subjected to more than 280 days of unnecessary pain and suffering at the hands of Kellogg. We applaud Judge Mays for beginning the process of righting this senseless tactic that was brutally imposed on these workers and their families."

BCTGM has said that the company’s proposals in local bargaining would have changed agreed upon wage rates and benefits for regular employees, thereby modifying the terms and conditions contained in the Master Contract that governs such terms and is in effect until October 2015.

The ruling comes after the National Labor Relations Board filed a complaint against the company in March this year.

Image: A federal judge has ordered Kellogg to cease its lock out of 226 members at its cereal production facility in the US. Photo: courtesy of Bakery, Confectionery, Tobacco Workers and Grain Millers, International Union.