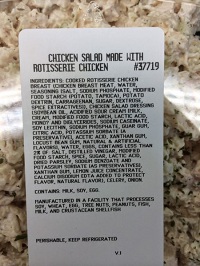 The Center for Disease Control and Prevention (CDC) in the US has stated that 19 people from seven states were infected with an outbreak strain of E coli O157:H7 as a result of consuming Costco Rotisserie Chicken Salad.

Of these, five people have been hospitalised, while two have developed a serious kidney problem, called hemolytic uremic syndrome (HUS). However, so far, no deaths have been reported, according to CDC.

The CDC, the US Food and Drug Administration, the US Department of Agriculture Food Safety and Inspection Service, and public health officials in several states are probing into this outbreak, the federal agency stated.

Illnesses were reported to have begun on dates ranging from 6 October to 3 November, and those who fell ill were in the age range of five to 84. Illnesses that occurred after 10 November might not be reported yet due to a delay in confirmation and reporting.

"Evidence shows that rotisserie chicken salad made and sold in Costco Wholesale stores in several states could be the source of this outbreak.."

The investigation, which is continuing, has not been able to identify which particular ingredient in the chicken salad is associated to illness.

On 20 November, Costco informed public health officials that it had removed all existing rotisserie chicken salad from all outlets in the US, and has put a stop to further production of the product until further notice.

E coli infections can cause serious illness in young children, the elderly and those with weak immune systems. Often, symptoms, which are seen within two to eight days of consumption of contaminated food, include vomiting and diarrhea.