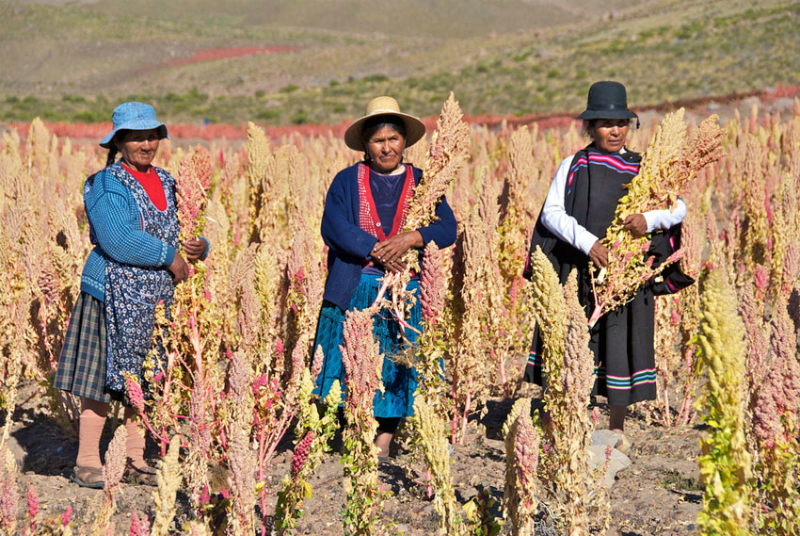 In early February 2017 it was announced that scientists have produced the first high-quality sequence for the quinoa genome. The grain, originally cultivated in the heights of the Andes centuries ago, has recently had a monumental surge in popularity in western markets, even being called a superfood.

But the team behind the genomic sequence claim that the applications of quinoa stretch much further than an accompaniment to broccoli and kale on the plates of the health conscious. Elliot Gardner spoke to Mark Tester, professor of plant science and lead on the project at King Abdullah University of Science and Technology, to find out how he believes the quinoa genome could change the world for the better.

Elliot Gardner: Can you tell me a bit more about your work on the genome?

Mark Tester: Sure, I work on salinity tolerance and I’m a physiologist, so I'm interested in how some plants grow better in saline soils than others. We've done a bit of work on wheat, barley and rice, where we're comparing salt tolerance and varieties, and finding genetic loci and physiological mechanisms that confer tolerance.

But then in parallel with that I started to think more about plants which are really salt tolerant to see if we can make them more domesticated, or useful as new crops. We started to do a bit of work on salicornia for example, but then realised quinoa is in a group of plants that are very tough. If you can understand how a tough plant does it, then that can help inform your improvement on the major crops, like rice which is very salt sensitive.

In the process of trying to do this I’ve realised that quinoa is also an amazing crop in its own right, but with all respect to the breeders in South America, there's still a lot to do. It could be a really important world crop if only we could domesticate it and make it more machine plantable and machine harvestable.

EG: So why has it taken until now for someone to sequence the genome?

MT: The amount grown in the world is tiny compared to the big crops, and it may be as simple as that. It’s also got some disease susceptibilities, it falls over, its tall, it’s very branchy – it’s not the best plant in the world to work with. That might be putting people off as well.

It’s a tetraploid plant and it’s moved its genomes around quite a bit in the process of the last million years or so, so it was a slightly tricky one. I guess the other dimension then is the technology is getting cheaper and better. Over the last couple of years the improvements in genomics have just been spectacular.

EG: At what salinity levels can this plant cope with if you still want to get an economically viable crop?

MT: From the literature it’s looking like you can still get a reasonable yield from hard sea water! So if that can be upheld in a centre pivot irrigation system, which we haven’t tested yet, that would be incredible. We've watered it with about 1/4 sea water and its looked fine.

EG: Will we start to see quinoa being grown in many more markets than just South America?

MT: Around 90% of the world's quinoa is grown in South America, but it’s planted in about 70 countries different around the world to a greater or lesser extent.

EG: Would you say that quinoa could be the solution to the world's food crisis?

MT: My aspiration is to develop agricultural systems where we're irrigating with water that we can't currently use. For every drop of fresh water that's used on the planet, there's another drop of brackish water.

I want to be able to unlock that salty water that we currently cannot use for agriculture. A third of the world's food is produced under irrigation, and almost all irrigation systems are currently unsustainable. They're based on extracting groundwater at a faster rate than it is being replenished, so we're sitting on a time bomb out there.

EG: What about this talk of ‘sweet’ varieties of quinoa?

MT: If you grew some quinoa in your garden, it’d be bitter because the seed naturally accumulates quite a high amount of a family of compounds called saponins.

The seeds have to be washed to remove these saponins. There are some sweet varieties out there, but if we want to make most of the varieties sweet so that you don’t have to use a large amount of water and energy and money to treat these wretched bitter seeds, you can introduce the sweetness trait into the myriad commercial varieties.

Currently thousands of litres of water need to be used to wash each tonne of seeds. And that is has to be non-salty water.

EG: Is there potential for the genetics of quinoa to be implemented in other crops?

MT: Well not through sexual reproduction, as it doesn’t hybridise with many other plants, except some other very minor crops – things that nobody’s never really heard of outside of South America and Mexico.

There will be lots of tricks that quinoa does that we can then learn about (frost and UV tolerance for example), and that could inform the improvement of the major crops like rice. You might have to find wild relatives of rice with the right versions of the genes that confer the tolerance. I would’ve thought that’s the way you'd have to do this given people's aversion to GM. It'd be much easier if we could use GM but I'm also a realist and a pragmatist, so we keep moving on.

EG: Why do you think that there's been such an increase in demand for quinoa?

MT: Its fashion! We live in times of peace, and health and plenty (well, broadly speaking), and people seem to need to worry about, and so they worry about their own health – and quinoa is a very healthy grain, so it’s a good plant for them to want to eat.

It’s high lysine for example, so a vegetarian can eat quinoa and have a more balanced diet, which is great.

EG: Do you think from your research we'll see quinoa becoming more of a staple?

MT: Yes – that’s exactly my aim. I don’t mind the trendy health freaks from Los Angeles eating quinoa and thinking they're smart – I don’t care about that, but what I do care about is the crop becoming cheaper and more available to poorer people. It could go through North Africa for example, though the Sahel, where there's all of this Islamic extremism, and Boko Haram's activities etc. My god, the poverty is terrible, and the quality of soil and water is terrible. And you think – get quinoa to grow in this country, it really would make an impact. Increase the quality of life for women and children, it would help so much. So yes, I believe very passionately that this can make a contribution – and a contribution at the end of the spectrum that we don’t worry enough about – about the poor and powerless in the world.