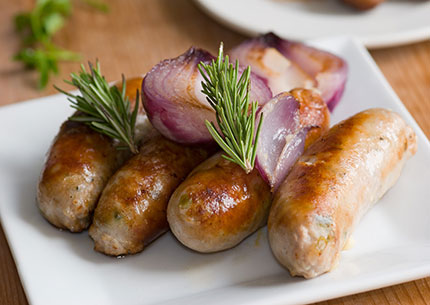 Meat-free sausages lead the meat-free product market and offer a low percentage of fat compared with authentic meat varieties. With health-conscious consumers and vegetarians driving consumption for meat-free products – and making up around 20% of consumers -the heat is on to provide healthy yet flavoursome and textured sausages to compete with their meaty counterparts.

The meat free and free-from market has expanded considerably over the past five years – and sausages are a large driver in the category. According to Mintel’s 2012 report, around 6% of UK consumers consider themselves to be vegetarian and an additional 13% say they tend to eliminate meat from their diet. In fact, Mintel recently confirmed that consumer interests such as health, price, variety and convenience are also important factors in a consumer’s decision to eat meat-free products.

"The bottom line is that vegetarians and vegans aren’t the only people eating ‘fake’ meat; meat eaters are also exploring this new found protein superpower," says Beth Bloom, food and drink analyst at Mintel, adding that "targeted health positioning has the potential to attract the specific attention of consumers".

Despite the growth of the meat-free sector amidst a consumer desire to eat more healthily, a consumer attitudes survey from Mintel of 1,500 internet users over the age of 16 revealed that when it comes to choosing meat-free products, there is still a lack of confidence in meat-free alternatives. Two-fifths did not like the taste of meat substitutes, one-third considered meat-free foods to be bland and around one-third do not understand what meat-free products are made of. This was further highlighted in Mintel’s 2013, which noted that "a key weakness is that over half of adults note meat substitutes lack flavour".

Although the most active brand on the meat-free market is Quorn, with a significant 21% share, new meat-free sausage brand, Secret Sausages, discovered that while meat substitute products dominate, a significant vegetable content is highly attractive to consumers.

The secret of Secret Sausages is the high vegetable content, hence the product’s tagline: vegetables in disguise. "Our sausages are 75% fresh garden vegetables and rice (no meat substitute) and the rest is water, to keep them moist, vitamin C to keep them fresh and some natural spices and blends to make them taste," says company director, Rachel Wicklow, adding that the sausage casing is made from rice and seaweed.

Having been tested at Ashwood’s Testing Facility, the sausages are confirmed to have 90% less fat, 35% less sodium and 50% less calories than the leading brands of their meaty cousins and Wicklow says that the sausages generally have a lower fat content (less than 4%) than other vegetarian sausages currently on the market.

But how has it been possible for the team to retain flavour and taste while also creating a textured product full of flavour? As part of the Scobie&Junor Group, along with Foodmaker – which have been blending seasonings since 1918 – the company is experienced at producing customer-driven flavourings.

"The chance to create our own range of sausages presented both a challenge and an opportunity for the team to really show what they can do," says Wicklow. "We have a passion for developing and dry blends of seasoning and spices, and retaining flavour and taste whilst optimising nutritional attributes is the core of our business."

There is no doubt that the rising interest in meat-free products is providing opportunities to smaller companies, such as Secret Sausages, to break onto the market.So how is market leader,Quorn, keeping its competitive edge?

"Quorn continually reviews its products and invests heavily in expansion and renovation," says Julian Cooke, Head of Category Management at Quorn Foods. "We are conscious that taste and texture plays an important role in the brand’s success and, therefore, having products that meet the needs and expectations of our consumers is of paramount importance to us."
Cooke explains that the meat-free sausage sub-category is now valued at £39.1 million and is being driven by Quorn, which experienced 15% more sales and 7.9% volume growth in the sub-category in the last year. He also adds that 250,000 new households entered the category in 2013 with health and weight management reasons being a strong driver for consumer interest in meat-free sausage consumption.

The company says that it is its commitment to innovation and growth that saw Quorn fuel two-thirds of the category’s growth. The launch of new gourmet pork-style sausages in 2012 – as part of the Chef Selection range – further helped to increase its presence in the category.

"When we launched Chef Selection, we found there was a gap in the market for a more premium range of products that met the need for a more succulent eat, yet remained healthier than standard meat alternatives. Plus we wanted to capitalise on the most popular SKUs in the category to encourage existing consumers to trade-up and introduce new users to the brand."

When it comes to producing a similar texture and density, Cooke says it is the result of a "complex method of forming, heating and, crucially, freezing" which enables development of the "right fibrous texture you come to expect from meat".

Entrepreneur Richard Loebenberg, CEO and founder of Great Food, has just launched new meat-free cocktail sausages to its range of meat-free products, which is entirely gluten free. Early on his career he worked with chefs such as Albert Roux as part of his training at Marks & Spencer, and, after a serious illness, felt inspired to create food that is not only vegetarian, but also free from nuts and gluten.

"The UK continues to see a rapid increase in demand for gluten-free foods and this sector represents the largest within the UK market for free-from foods and it is a category seeing dramatic growth," says Loenbenberg. He adds that, according to Kantar World Panel UK, sales of gluten and wheat free food reached £114 million in 2012 and sales have increased by 23% within the last year.
Other products in its range, in addition to the cocktail sausages, include falafel and burgers, the main ingredients of which are chickpeas, which are very high in protein. "Two to three tablespoons equate to one portion of the daily recommended five portions of fruit and vegetables," says Loebenberg.

Appealing further to the health-conscious consumer, Great Food’s range are also baked with steam (as opposed to being fried) as a result of the company commissioning its own special ovens that steam-bake each batch. But what does the company to do ensure the new range can compete with flavoursome meat and meat-free competitors?

"We know that there is a perception that vegetarian food can be bland, and we’ve spent time perfecting our recipe so every wholesome mouthful is packed with texture and bursting with flavour" says Loebenberg. "We use natural spices, red peppers, fruit and chilli to give a warm and spicy flavour.We keep the processing to a minimum and retaining the texture of the vegetables gives a real ‘meaty’ texture."

According to Mintel, more than half of shoppers are now willing to try out new brands and one-third of consumers choose meat-free options and variety in their diets – a highly positive outlook for food companies in the meat-free marketplace. "The expansion of formats and flavours has allowed the category to grow beyond one of necessity to become one of desire," says Bloom. "Product manufacturers and marketers have a chance to come out from behind the veil of ‘substitute’ and stake a claim as a food option that stands on its own."