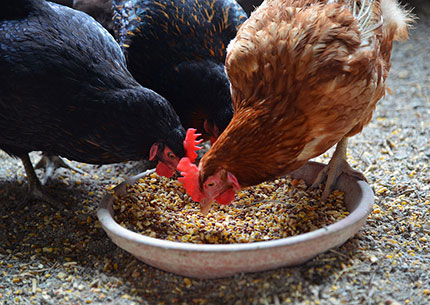 Currently GM crops enter Europe mainly as animal feed and there is little commercial growing. Any marketed GM foods must be approved by GM regulators and clearly labelled. Currently there are no GM foods on sale in the UK, but there is meat and poultry on sale that has been fed GM feed.

In June 2013, UK environment secretary Owen Paterson delivered a speech where he stated that he wanted to start a more "informed discussion about the potential of genetically modified crops".

This was followed by announcements from major supermarkets including Tesco, Sainsbury’s, M&S and The Co-operative group that they would allow the use of GM feed for poultry and pork products. The announcements could be taken as a sign that supermarkets were trying to tread carefully and not frighten consumers but what can consumers make of the latest addition to the ongoing GM debate?

The UK supermarkets stated that they came to this decision because it had become increasingly difficult to source non-GM feed, leaving Waitrose as only major retailer to maintain its stance on non-GM feed for poultry and eggs. The Waitrose MD, Mark Price, has stated that the supermarket will stay GM free for as long as they can, though this hints to a future where the only choice for consumers who don’t want to eat GM food is to eat organic.

A recent poll by The Grocer revealed that nearly three-quarters of the general public did not trust supermarkets on their use of GM food. In a poll by Leatherhead Food Research, out of 1,000 people 72% said they did not trust retailers to tell the truth.

Dr Helen Ferrier, chief science and regulatory affairs advisor at the National Farmers Union (NFU), explains that the short supply of non-GM feed is not a recent trend, stating that "because feed is such a large proportion of the cost of production and margins are very tight … if there’s a slight increase in feed costs it makes a big difference.

"That’s been a problem for many years. For the last couple of years there’s been a problem with being able to source it and with the importing companies saying they can’t guarantee forward contracts."

The majority of Europe’s GM feed is sourced from Brazil, the top global exporter of soya beans (used predominantly in poultry feed), sugar and many other products. According to data from The World Bank, the European Union is the biggest importer of Brazilian products, spending $20.4bn on Brazilian-grown products.

Brazil seems to be devoted to GM technology in agriculture but Craig Sams, executive chairman of Carbon Gold and director of Soil Association Certification, believes that this is not necessarily the case and states that enough non-GM crops can be grown to meet demand: "The Brazilians will grow whatever we want. They can grow GM, they can grow non-GM."

The argument for and against growing GM crops in Europe

While British supermarkets cope with the current GM feed crisis, one way around it could be for Europe to produce more GM crops. UK environment secretary Owen Paterson is calling for more discussion around the issue of GM and the potential to grow more in Europe.

The NFU have been publicly in favour of GM technology and argue that farmers should be able to use GM feeds for livestock. The limited amount of GM crops grown in Europe has been put down to the EU regulations’ "politicised" process by some pro-GM advocates.

"Farmers would not grow it [in the UK] but certainly, there is a problem with the EU regulation and the EU regulatory process that means that new varieties of GM crops are not getting through the regulatory process very quickly at all," says Dr Ferrier. "It’s taking years and years and years, therefore not many new crops are coming onto the market."

"There’s a vote [on GM crops] and a lot of countries will vote no for political reasons rather than for scientific evidence based reasons … further back in the process there’s quite a lot of asking for reassessments and questioning the science and asking for the process to be gone through again which lengthens it all out and adds a lot of pressure to the people that are doing the safety assessments for the European Commission."

Critics argue that a major concern over GM crops being grown more frequently in Europe is that it will replicate the US model (around 80% of US foods contain GM ingredients) where large, multinational companies have a strong hold over the GM seed market.

Sams claims that half of an American farmer’s income is subsidy-based and comes from the taxpayer. Sams continues: "They don’t actually make money in the normal way a business makes money. Until the industry can sort itself out all GM does is concentrate even more on the size of farms to larger and larger farms that are semi-automated and that works up to a point."

Though this could also be an argument for less regulation, as it can cost up to $10m to develop a new GM crop and take up to ten years to approve it. Only the large companies and research centres can afford to spend the money on new crops that cannot be sold for years. This creates a barrier to small companies who may not have the funds to spend developing new GM technology.

The main question consumers and manufacturers want to know about GM is always "is it safe?" There is currently no evidence to suggest that GM foods have a negative impact on human health, though critics of the technology argue that more long-term research needs to be done into its safety and effects on human health.

French professor Gilles-Eric Séralini, a molecular biologist at Caen University, caused a scientific storm in 2012 when he claimed that a study he conducted over two years showed that some GM foods led to tumours and cancers in rats. The results and design of the experiment were widely criticised, including by the European Food Standards Agency (EFSA) who described the study as "inadequately designed, analysed and reported".

Séralini visited the UK in September 2013 to speak at a series of parliamentary and public meetings where he challenged the way food safety is assessed and asked for the long-term testing of food. Séralini and many other GM critics believe that the main problem with the technology is that it is being used to create ‘pesticide plants’ that are designed to absorb more pesticide into the plant. If crops are not rotated farmers see a sharp rise in weed resistance, requiring the use of stronger pesticides.

A French government agency has now called for the study to be repeated with new guidelines that everyone can agree on, issued by the EFSA. For some this new study is seen as the defining moment in the GM debate.

Sams says: "This will be the big one because with €3m, it’s completely in the public eye and Séralini and these people are involved so we will know if this food is safe to eat."

The future of agriculture and GM crops

The future of agriculture and where GM lies in it is a question that can only be answered in time, and is one both sides are anxiously waiting to be answered. Critics of GM seem to have no issue with genomics and molecular biology but would prefer longer research studies to fully understand the effects of GM foods.

"To say that Americans, who are 27th in the world health indicators, have been eating it for the last 15 years and there’s no evidence that they’ve suffered any damage. Well, we don’t know we don’t know what the damage is and a lot of it is," Sams exclaims. "As the Danish research with pigs has shown, it’s intergenerational so you feed the genetically modified food to a sow and it’s her piglets that are the ones born with defects and reproductive problems and so on. We’re playing with something that can impact the impact."

A solution that could satisfy both sides of the debate may have been found by Dutch seed company Rijk Zwaan who use molecular biology to create seeds that produce more precise products.

"They don’t use GM at all. Their view is that it’s an old technology, it’s too random and not resilient enough," Sams explains. "What they’ve done with tomatoes is they taken 150 different tomato varieties, mapped the genes of them, their complete genome. Then compared the characteristics of the different tomatoes and identified where on the genome these characteristics reside."

"When Monsanto were developing roundup ready soy beans it would take a scientist in a laboratory with four or five lab assistants six months to map the genome of a soy bean. Now you can do it in a couple of hours. We’re so much more sophisticated now that we don’t really need that sort of crude approach that prevailed in the 90s."