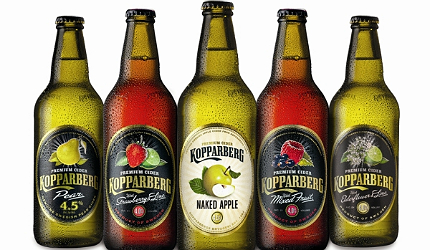 When Irish brewer C&C launched its Magners Irish Cider in the UK in 2005, it transformed one of the most traditional and old-fashioned drinks markets on Earth, making a seemingly outdated drink pliable for a large and mostly young consumer group. Today, cider in all variations and flavours is venturing into the British market.

"There will definitely be a bigger focus on social media and on PR and events to give a lot more depth to the Kopparberg brand."

Competition among producers is fiercer than ever and each year during the summer they compete, with huge marketing campaigns, for the favour of British consumers.

Sweden’s original fruit cider brand Kopparberg, now in its sixth year in the UK cider market, has firmly established itself as the third largest cider company in Britain. While many British cider producers count and rely on their experience and long traditions of making cider, Kopparberg has ventured out with new and innovative flavours. Kopparberg Pear Cider is the number one pear cider brand in the UK and particular popular in the creative scene of East London.

With the launch of the £10m ‘ün-established since 1882’ campaign in mid-May 2012, the company aims to bolster its ties to music and creative arts. Kopparberg head of marketing Rob Calder explains the why the Swedish cider producer is different to so many of its British competitors, shares the vision behind the ün-established campaign and tells us how social media channels have changed the face of cider marketing in the UK.

Elisabeth Fischer: What differentiates Kopparberg from other ciders in the UK?

Rob Calder: Firstly, there is the taste, which is entirely different to established ciders. We describe Kopparberg as a semi-sweet cider and it’s definitely a big part why people love the brand so much. Many people have come into cider because of the different taste of Kopparberg.

The other thing that differentiates Kopparberg from other ciders is the way that the brand has grown, namely by gaining listings in pubs and bars in really opinion-forming places across the UK.

Originally Kopparberg wasn’t a brand with a big budget so we had to promote it throughout pubs and bars, and it was adopted by a real creative set and a lot of bars in East London. As a result it gained popularity in very cool places.

EF: What’s the vision behind the ün-established marketing campaign?

RC: I think the reason why our ün-established campaign works is because it’s true. It’s not just a made-up brand story; this is genuinely a business that does things differently.

"Traditionally, a lot of the big cider makers are doing massive and cheesy campaigns and left the rest up to the pubs to sell."

Having met the owner, I know it’s a business that has been founded in very different ways to big co-operations in the drinks industry. In fact, the Kopparberg brewery came together in the town of Kopparberg in 1882 when lots of brewers got together and decided to do things their own way.

Really what we’ve done is just continue this story. Kopparberg is not owned by a big multinational business; it is a small Swedish business that has grown during the last 20 years.

RC: Most of our volume comes from 25 to 34-year olds. That’s who we try to talk to with our marketing campaigns. Kopparberg is a premium brand so people are prepared to pay a bit more for it. We have to attract people who have a few more quid in their pocket and are willing to spend it on a quality drink.

"With the launch of the £10m ‘ün-established since 1882’ campaign in mid-May 2012, Kopparberg aims to bolster its ties to music and creative arts."

RC: It’s definitely changing cider marketing. Traditionally, a lot of the big cider makers are doing massive and cheesy campaigns and left the rest up to the pubs to sell. We do an awful lot of social media and it’s growing more and more. Kopparberg has now got more than 120,000 Facebook fans; we had it double in the last six months.

Our brand is getting a lot more attraction in social media so more and more of our time is spent working out how we speak directly to fans. It’s not like television, which is a one-way dialogue; with social media it’s always a two-way dialogue and we have to do things that appeal to those people and get them involved.

During the recent football championships England were playing Sweden and we decided to support both teams, because we’re a Swedish brand and because England is obviously a big market for us. We got this really great and fun idea to support ‘Swengland’. It’s just a bit of fun and we gave away kits with flags and moustaches for people to support either England or Sweden.

We’ve got some more activity in the pipeline but we also did a great piece of interactive activity called the ‘Taste Labs’, where we got a number of consumers into a session, which was great fun.

EF: When marketing alcohol, social responsibility is always a big challenge. Has it been an issue for Kopparberg?

Grolsch officially opened its brewery in Enschede, Holland, in April 2004. The facility was built to replace two other smaller breweries at Enschede and Groenlo.

RC: It hasn’t really been an issue for Kopparberg because our alcohol level is either four percent or 4.5%, which is fairly standard for beer and cider.

Generally, we’re also a more premium brand so people have to pay more for Kopparberg. It’s not really the kind of thing that young people would binge-drink on because it would cost them quite a lot of money.

But we’re very responsible; we’re a member of the national body of responsible drinking, the Portman Group, and that’s quite a recent thing.

We make sure that we adhere to the guidelines but it’s really about being in the right places, being in the right bars and working with responsible customers, rather than putting ourselves in situations where we’re going to be sold very, very cheaply.

EF: What can we expect to see from Kopparberg in 2013?

RC: I can’t reveal too much at the moment but we will see the next stage of the ün-established campaign. We think it’s a great platform and we will continue to find different ways to speak to the consumer.

There will definitely be a bigger focus on social media and on PR and events to give a lot more depth to the Kopparberg brand. We’ve been involved in a lot of festivals this year so that’s another area that we’re looking at.