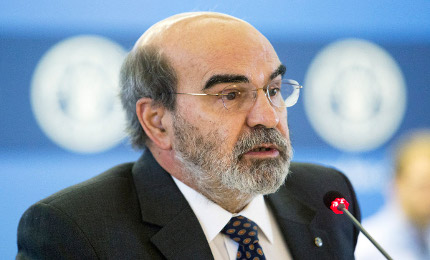 UN stresses on the need for enhanced food measures

A United Nations committee has opened its current session with a goal of adopting responsible principles to invest in agriculture and food systems to increase food security.

The UN has stated that close to 805 million people are still chronically undernourished in the world.

In his address to the 41st session of the Committee on World Food Security (CFS), director-general of the UN Food and Agriculture organisations (FAO) José Graziano da Silva said that while progress against hunger continues ‘it is a society, not a Government, that decides to eradicate hunger and achieve food security’.

The agreement received a unanimous approval of Chiquita’s board of directors, and involves Cutrale-Safra acquiring all of Chiquita’s outstanding common shares for $14.50 per share in cash.

With the merger, Chiquita will work with Cutrale Group, a leading fresh produce company, and global financial services company the Safra Group. Including debt, the value of the deal amounts to $1.3bn.

The Scottish Government is set to establish a new food standards body, Food Standards Scotland (FSS), which will replace the current food agency.

The Scottish Parliament has unanimously backed the first stage of the Food (Scotland) Bill, STV news reported, while the health committee has already approved it.

A Nielsen global report has revealed that consumers across the globe spent a total of $374bn on snack foods annually between 2013 and 2014.

The industry has seen an overall year-over-year increase of 2%. Europe and North America are the biggest spenders, with the two countries recording sales of $167bn and $124bn, respectively.

The demand for snacks is also witnessing an increase in regions such as Asia-Pacific ($46bn) and Latin America ($30bn). Sales in the Middle East / Africa ($7bn) grew by 5%.

The deal also includes the acquisition of Montana Food operations in Chile, for no further consideration.

Over the next few days, the firms will sign purchase agreements, with the transaction process expected to be completed in the coming weeks.

Dutch private equity firm Pulsar Network Capital has launched a new sustainable food fund with a capital of €75m ($94m), said to be the first in Europe to focus completely on healthy and sustainable food.

This fund will be used to invest in 15-25 sustainable food, nutrition, foodtech and agritech companies that work towards making the food and nutrition supply chain healthier, safer, more efficient and more sustainable.

The fund will work with companies that have a profitable business model and focus on the creation of social and/or sustainable innovations in the international food industry. With this investment, the fund management will aim at transforming its portfolio companies into international players and market leaders.

The Taiwanese Government is launching a new food safety office, which will begin operations this week in response to the recent cooking oil scandal.

This office will be an upgrade of the current food safety promotion task force and has been set-up following a number of food standard breaches that were exposed in the recent months.

Executive Yuan said that preparatory work on the new department has been undertaken by three officials from the Council of Agriculture, the Ministry of Health and Welfare, and Ministry of Economic Affairs.

The company provides a line of low sodium, organic, diet and sugar free products. With the expansion of its headquarters, Goya’s distribution capabilities of healthy and authentic Latin food will be strengthened.

The new, 250,000ft² facility will act like the company’s West Coast hub which will provide its services to surrounding states like Arizona, Nevada, Oregon, Washington and Utah.