SFF will be situated off the coast on an open sea, thereby requiring less land and minimal agricultural imports.

ConAgra to pay criminal fine of $11.2m over Salmonella contamination

ConAgra Foods’ subsidiary, ConAgra Grocery Products, has agreed to plead guilty and pay a fine of $11.2m regarding the shipment of contaminated peanut butter linked to a nationwide outbreak of salmonella poisoning from 2006-2007, the US Department of Justice announced.

Said to be the largest ever criminal fine paid in a food safety case, ConAgra will pay a fine of $8m and forfeit assets of $3.2m.

In February 2007, the US Food and Drug Administration (FDA), and the Centers for Disease Control and Prevention (CDC) had linked the salmonellosis outbreak to Peter Pan and private label peanut butter that had been produced and shipped from ConAgra’s Sylvester peanut butter plant.

Mechanically tenderised beef to follow new labelling rule from May 2016

The US Department of Agriculture’s (USDA) Food Safety and Inspection Service (FSIS) said that raw or partially cooked beef products that have been mechanically tenderised will need to carry more information.

The new requirements will be effective from May 2016, or from a year of the publication of the rule in the Federal Register.

As per the new labelling requirement, food manufacturers will need to mention more information about the product, along with cooking instructions to educate consumers about how to prepare them safely.

The World Trade Organisation (WTO) ruled against a US appeal for introducing country-of-origin labels on meat packages, saying it discriminates against livestock from Canada and Mexico.

As per the US rules, meat producers need to identify the place of origin for animals, as well as where they are raised and slaughtered. The information is required to be printed on the packages that are sold in grocery stores.

After the US introduced the rule for the labeling of meat products in 2009, Canada and Mexico had filed suits at the WTO saying that the move was discriminatory and leads to an increase in expenses for them, while decreasing the value of their livestock.

The British Government is discussing a proposal, the implementation of which will result in more detailed labelling of meat in the country.

While currently meat labels read ‘Born, Raised and Slaughtered in Britain’, it is being proposed to include the area of the UK where the product has been produced.

The government is also in talks to label dairy products like cheese and butter with ‘Made from British milk,’ reported The Independent.

Head of food labelling at the Department for Environment, Food and Rural Affairs Stephen Pugh was quoted as saying that there was a need to label alcoholic products too.

As part of the deal, Applegate will operate independently as a standalone subsidiary, under Hormel’s refrigerated foods segment.

"This deal allows us to expand the breadth of our protein offerings to provide consumers more choice."

New antibiotic standard for poultry in US

The US Department of Agriculture (USDA) will verify the Certified Responsible Antibiotic Use (CRAU) standard that was developed by School Food FOCUS (Food Options for Children in the US) and The Pew Charitable Trusts. 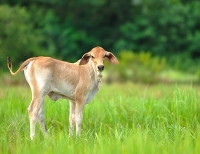 A team of Chinese scientists reared genetically modified cattle that are said to be rich in omega-3 fatty acids, normally found in fish.

The introduction of the fat1 gene in the cattle led to a fivefold increase in the levels of beneficial oils.