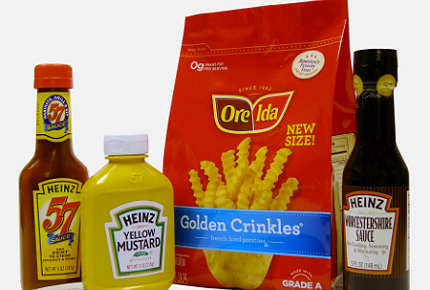 Under the terms of the agreement, Heinz shareholders will receive $72.50 in cash for each share of common stock they owned as of the effective time of the merger, without interest and less any applicable withholding taxes.

With the completion of the deal, the common stock of Heinz will no longer be listed for trading on the New York Stock Exchange, and Pittsburgh will be maintained as the food company’s global headquarters by the investment consortium.

US-based Dole Food has announced that it has received an unsolicited proposal from David H Murdock, the company’s chairman of the board and CEO, to acquire all of the outstanding shares of common stock which are not already owned by Murdock or his family, in a deal which values the company at $1.5bn.

As per the proposal, Murdock, who already owns a 40% stake in the company, will pay $12 per share in cash for the remaining 60% stake, in a deal which will bring the value of the transaction to $645m.

A team of researchers from the UK’s Government Chemist Programme, in LGC, have developed a new control material to help laboratories identify false positives when monitoring imports for genetically modified (GM) rice in food products originating from China.

According to researchers, to date, there has not been a straightforward way of verifying that tests for the natural virus worked properly in the lab, but the new control material can help labs identify false positives when monitoring imports for genetically modified (GM) rice.

For the study, the researchers synthesised a specific DNA sequence from CaMV and inserted it into a standard plasmid to provide a suitable control, and then tested using a validated and EU approved PCR assay.

National Beef Packing, an establishment based in Kansas, US, has recalled about 22,737lbs of raw ground beef products as they may be contaminated with E. coli O157:H7.

The products were manufactured on 25 May 2013 and shipped to various institutions and retail establishments in Texas, Tennessee, Kansas, Mississippi, Illinois, Georgia, Kentucky, Louisiana, Oklahoma, Missouri, Arkansas and Arizona.

The problem was identified during routine monitoring by the agency, which confirmed a positive result for E.coli O157:H7, and a subsequent investigation determined that National Beef Packing was the sole supplier of the source materials used to manufacture the products.

US-based agri-processing company Archer Daniels Midland (ADM) has confirmed it is in negotiations to sell its cocoa business, which is estimated to be worth $2bn.

ADM has consulted a number of potential buyers over the potential sale of its cocoa division, reported the Financial Times, citing sources familiar with the matter.

The sale will allow the US-based company to focus on its agricultural portfolio, such as corn and oilseeds, including soya beans, at a time when demand from emerging markets, including China, is increasing significantly.

Swiss food giant Nestlé has unveiled more than 20 new microbiology laboratories at its Nestlé Research Center in Lausanne, Switzerland, as part of its efforts to study food-borne pathogens to ensure safer food production.

Nestlé stated that it is employing advanced scientific techniques to refine the processes it uses to destroy pathogens without altering the nutritional value of food products.

Müller Quaker Dairy, a joint venture between PepsiCo and German dairy company Theo Müller, has announced the opening of a new $206m yoghurt manufacturing facility in Batavia, New York, US.

The new facility will serve as a national production and distribution centre for Müller yoghurt, which was launched in selected regional markets in 2012.

With the new facility, the joint venture is seeking to tap the US dairy market, where per capita consumption of yoghurt is significantly lower than that of Europe.

A fire at a poultry farm and processing facility in Jilin province, China, is believed to have killed at least 112 people.

The facility is located 800km north-east of Beijing and is owned by leading processed chicken producer Jilin Baoyuanfeng Poultry, which employs about 1,200 people.

The fire broke out following three explosions in an electrical system at the facility and more than 300 workers were at the plant when the fire occurred, reports state-run Xinhua news agency.

Wising up to food safety – smartphone sensors for the sensible shopper

Spectrometers smaller than sugar cubes could soon be installed in smartphones to allow consumers to test the freshness of food as they shop.

From Big to Bug Mac – the edible insect phenomenon

With the world population due to hit nine billion in 2050, feeding the world may well rest on a six legged diet.