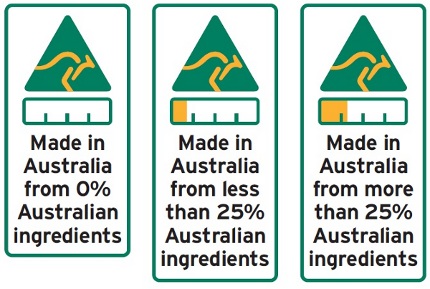 Australian Prime Minister Tony Abbott announced a mandatory country-of-origin labelling system for food, to come into effect from next year.

The move is said to have been prompted by the hepatitis outbreak earlier in 2015, attributed to contaminated Chinese berries.

As per the rules, food labels will provide information on the proportion of products made, grown or packaged in Australia, as well as a bar chart with domestic and international ingredients useage. Domestically produced products will have a green and gold kangaroo logo.

As part of the $440m global deal, Cargill will own ADM’s three chocolate and compound production sites in Europe, including Liverpool (UK), Manage (Belgium), and Mannheim (Germany). More than 650 employees will be transfered to Cargill, while quintessential European ADM brands such as Ambrosia, Merckens and Schokinag will join Cargill’s existing portfolio of chocolate brands.

The deal also includes three chocolate, compound and liquor production sites in North America, including Milwaukee and Hazleton in the US, and Georgetown in Canada.

US to allow beef imports from Argentina and Brazil

The US Department of Agriculture’s (USDA) Animal and Plant Health Inspection Service (APHIS) is now allowing beef imports from Argentina and Brazil.

Since 2001, the US has imposed a ban on the import of Argentine beef as a measure to avoid a foot-and-mouth disease outbreak from Argentina’s cattle herd.

30% to 70% other ingredients make up dried oregano in UK and Ireland, says new study

A recent food fraud study in the UK reveals 25% of 78 samples of dried oregano bought at various retailers were found to be mixed with other ingredients, such as olive and myrtle leaves.

The study conducted by the Institute for Global Food Security director Chris Elliott, whose insights were revealed exclusively to Which?, show that these ‘other’ ingredients were found to constitute between 30% and 70% of the product.

Elliott sampled oregano from a range of shops in the UK and Ireland, and from online retailers using mass spectrometry, which identifies compounds by their atomic composition.

Britain confirmed the detection of a case of H7N7 avian flu at a poultry farm in Lancashire in northern England.

The confirmation comes three days after a suspected case flagged at the farm resulted in the imposition of a temporary control zone. Following the confirmation, a 10km surveillance zone and an inner 3km protection zone was imposed at the site.

As per the restriction, poultry farms within 10km of the affected farm will not be allowed to move poultry, captive birds or other mammals unless they have the required licence.

Amid the worsening food crisis in Venezuela, the government ordered food manufacturers to supply food staples to a network of state-run supermarkets.

As cited in the Associated Press, the Food Industry Chamber said producers of milk, pasta, oil, rice, sugar, and flour have been asked to supply between 30% and 100% of their products to the state stores.

Durian candies from Wendy’s, which caused illness in close to 2,000 children in the Philippines, tested positive for the Staphylococcus bacteria, said the Food and Drug Administration (FDA).

The Wendy’s-brand confectionary was sold outside schools by street vendors.

The incident occurred in Mindanao, the country’s southern-most large island. After consuming the sweets, the victims complained of stomach cramps, diarrhoea, vomiting, and headaches.

A new study by the University of Birmingham revealed that traffic lights on food packages are confusing consumers and are likely becoming a hindrance to obesity prevention attempts in the UK.

The study also found that while shoppers took into consideration the front-of-pack (FOP) labels, most of them considered the traffic light labelling system unclear and ambiguous.