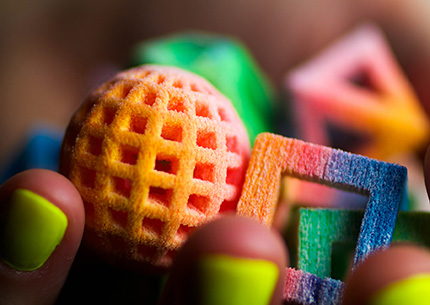 3D food printers are the future of food; this is according to mechanical engineer Anjan Contractor of Systems & Materials Research Corporation (SMRC), whose 3D food printer single-handedly whipped up a pizza at the 2013 SXSW Eco Conference. Earlier in the year, NASA awarded the company a Small Business Innovation Research Phase 1 contract in order to explore the possibility of 3D food printing in space.

Contractor previously told business news blog Quartz: "I think, and many economists think, that current food systems can’t supply 12 billion people sufficiently." He added: "We eventually have to change our perception of what we see as food."

Contractor’s vision has been met with a mixture of excitement and scepticism, while some plainly disapprove. In February, Amy Leech, senior policy officer at the Soil Association, wrote in the Guardian: "3D printed food helpfully highlights the failings in our current approach to feeding our population in sugar-coated technicolour. However much food we produce, if it continues to be processed food high in fat, sugar and salt, then we will fail to feed ourselves sustainably and healthily."

Admittedly, the idea of printed meals from cartridges of powders and oils that last up to 30 years doesn’t necessarily whet the appetite, though some would disagree that 3D printed food is "processed food high in fat, sugar and salt".

Spanish start-up Natural Machines is all about "fresh, healthy food", says CMO & co-founder Lynette Kucsma. Their 3D food printer is known as Foodini. It is because of their commitment to fresh food, as well as offering the choice of both sweet and savoury, that makes the Foodini different, she says. "A lot of other 3D printers out there are really focused on what our old business model was – the chocolates and sweets or what have you … We’re also very different in that we’re allowing fresh food to be put into the capsules so you’re not forced to buy pre-filled capsules."

While the company is currently working with retailers on pre-filled "Foodini-ready" capsules as well as capsules with longer shelve lives, they will do so under "the restrictions that we do want it to have no preservatives or very little natural preservatives," says Kucsma.

Where it all began: the confectionary market

Given the tendency of dessert to embrace elaborate design and embellishment, confections are a good area of introduction based on the complexity 3D printing allows," says creative director of food products at 3D Systems Liz von Hasseln, adding "3D printing is also highly promising for personalized nutrition applications and will expand in application in the future."

The internet of things: can Joe Bloggs 3D print?

Both the ChefJet and Foodini are expected to enter the market soon. Due for the second half of the year, 3D Systems’ ChefJet and ChefJet Pro will target niche markets with price tags "in the sub-$5,000 range" and "the sub-$10,000 range" respectively. According to Von Hasseln: "The ChefJet will inspire culinary innovators and artists, professional bakeries, confectionaries, restaurants and entertainment companies."

Meanwhile, Natural Machines’ Foodini is expected to be available to the public in January 2015 at approximately $1,300 which their website states is "equivalent to, for example, a high-end food processor, on the lower side of the price scale for a 3D printer."

The Foodini will have two different target markets – home kitchen users and professional kitchen users. According to Kucsma, the different chefs with whom they are working, from those who "own one restaurant" to "Michelin starred chefs who are really into 3D printing", see the 3D food printer as a "high-tech kitchen tool that will help them create new designs, help them differentiate their restaurants, and help them create entirely different dishes."

Natural Machines envisions a 3D food printer that is "part of the internet of things", enabling the company to provide updates "so that your appliance always evolves with the new 3D technologies". Users might one day be able to browse recipes and share them online. Furthermore: "We see in the future that, let’s say that I printed a dinner tonight and I think it’s fabulous, I can push it directly to you on your Foodini and maybe your Foodini will talk to the refrigerator over the internet of things and know you have all the ingredients."

Not your average kitchen appliance: being part of the technology society

Kucsma sees the 3D food printer one day becoming a common kitchen appliance. Comparing it to the microwave, Kucsma says: "People are going to have different uses for it but we think the adaption is going to happen a lot faster, just because of the way 3D printing technology is evolving. Plus with the fact that we’re a technology society these days, so we adapt technology a lot faster than we did in the past."

Contractor’s solution to 3D printed food for long-distance space travel is still some time away but, beyond that, he sees a day "when every kitchen has a 3D printer, and the earth’s 12 billion people feed themselves customised, nutritionally-appropriate meals," according to Quartz.

There seem to be various kinds of 3D food printers in the making, with different uses and target markets in mind. For 3D Systems, it’s about sophisticated sweet treats for professionals. For Natural Machines, it includes healthy options for a wide market, from the chef to the homemaker who’s too busy for the challenging or mundane cooking tasks. For Contractor, it’s a solution to long-distance space travel and eventually to feed the world.

Another individual in the 3D food printing business is chief technology officer of Seraph Robotics Jeffrey Lipton who, like Contractor, believes that digital cooking could someday transform how we prepare and consume food. "While some people believe the future of printed food will begin at the chemical level, others think it will become a common tool to augment the moulds, knives, and ovens we already have. Regardless, both camps agree that the information age’s transformations have started making kitchen magic."