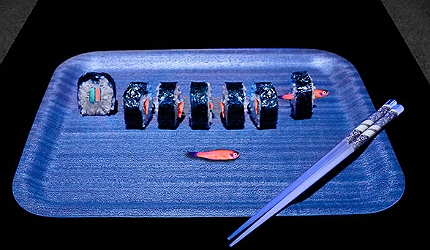 Experimental gastronomy is slowly changing public perceptions about what is and isn’t edible. Foods that traditionally get the taste buds going and saliva juices flowing are being turned on their heads and pretty much anything goes.

"The ingredient is a fish that, when eaten raw and under a black light, emits a fluorescent colour as bright as a 1960s lava lamp."

As founding director of Dublin’s Science Gallery, Michael John Gorman said ahead of the EDIBLE exhibition, which took place between February and April 2012: "This is not surprising – we are unique among the eaters of this planet in our understanding of food, and the only species that can turn something dull and inedible into something tasty and nutritious".

The Science Gallery’s first foray into food was co-curated by The Center of Genomic Gastronomy’s Zack Denfeld and Cat Kramer, who are not afraid to delve into unchartered territory when it comes to creating new and unusual types of food.

In fact, some of the pair’s experimental dishes could not be served at the exhibition because the main ingredients are illegal everywhere except for the US and Taiwan.

The ingredient is a fish that, when eaten raw and under a black light, emits a fluorescent colour as bright as a 1960s lava lamp. This special ‘glow in the dark’ fish can transform a meal into something more fitting for a futuristic sci-fi film than for the family dinner table.

Glow in the dark sushi, or glowing sushi, "uses this strange ingredient called Glofish, which are transgenic zebrafish that have transgenes inserted in a range of colours", explains Zack Denfeld.

"The Center for Genomic Gastronomy’s glowing sushi dishes grew out of an interest in the debates about food and biotechnology."

The Center for Genomic Gastronomy’s glowing sushi dishes grew out of an interest in the debates about food and biotechnology. "We wanted to bring out that this technology is really exciting but there’s also a lot of fear around it and it’s going to be used in novel ways that aren’t necessarily expected," argues Denfeld.

Glofish, for example, are typically found in US pet shops and aquariums rather than food stores because "the man that brought transgenic zebrafish to the US decided to market them as a pet rather than food".

Glofish are the size of a child’s little finger and fluoresce very strongly under UV light, but lose their bright fluorescence when cooked. For this reason, The Center of Genomic Gastronomy created a handful of raw sushi dishes so that would-be diners could experience eating a glow in the dark meal. Zack Denfeld and his team demonstrate the dishes on their online ‘Glowing Sushi Cooking Show’ so anyone with access to Glofish can make them at home.

One of the cooking show recipes uses a red and green fish to emulate a traffic light. It is called the ‘Stop and Glow’ roll and is based on a typical sushi roll.

"A crushed green Glofish and wasabi powder are used to create a glow in the dark kryptonite paste."

Rice is shaped into a square and the red and orange fish are placed on top with seaweed. Finally the fish and roll are wrapped in place with a strip of nori. "Then we have the ‘Not in California’ roll, which is based on the hybrid recipe of a California roll of avocado and steak crabmeat and it’s a cut sushi roll," says Denfeld.

The final dish, and arguably most creative, is the aptly named ‘Kryptonite’ sushi roll. A crushed green Glofish and wasabi powder are used to create a glow in the dark kryptonite paste. The raw fish is mixed with a pinch of the powder, added to water and stirred with a mortar and pestle.

"We put it on a cut cucumber roll so it looks like a mound and with the two types of green it looks like Superman’s worst enemy," says Denfeld.

A niche cuisine for eating in or dining out

Glow in the dark sushi is undoubtedly a niche cuisine. But could it take off in mainstream gastronomy in future? Denfeld suggests it might be difficult for glowing sushi to become radically popular because the fish are only legal in the US and Taiwan. However, "some people [in the US] are trying it at home and there are some restaurants using it," says Denfeld.

"The range of pet Glofish on offer has expanded since the cooking show’s first episode in 2010."

He is interested to see how the dishes are being presented as he would like to make a ceramic sushi dish with a black light built in to make the meal come to life in a whole new way.

"I would be curious to see if people at home or restaurateurs are using a black light. You have those restaurants where you eat in the dark so maybe it could become an extension of that," he says.

The range of pet Glofish on offer has expanded since the cooking show’s first episode in 2010, with new colours, including galactic purple and cosmic blue. There is even a new species of glow in the dark fish available, a tetra fish, which is rounder and larger than the original transgenic zebrafish.

"It seems like a new episode [of the cooking show] is needed so we’ll have to wait until we go back to the US and can access the fish and then hopefully we’ll be able to do a new one," says Denfeld.

The future of food: an imaginative gesture

One of the main reasons why the glowing sushi story is not yet complete is because The Center of Genomic Gastronomy has been busy getting stuck in to other culinary experiments.

"One really fun one that we did at the EDIBLE exhibition was the Vegan Ortolan project. We took the cruellest dish known to man, the French dish ortolan and challenged a chef to create something similar in terms of flavour, profile and texture out of vegan ingredients," says Denfeld.

The original dish involves force-feeding a small bird and drowning it in alcohol. Visitors to the EDIBLE exhibition were asked to eat the dish in the traditional way: "With a sheet over their heads to keep the flavours in and to hide their shame from God".

The brief for the EDIBLE exhibition, which included a video of the ‘Glowing Sushi Cooking Show,’ was to offer visitors an unexpected take on the future of food. Glow in the dark food may not appeal to everyone’s tastes, but there is no doubt that glowing sushi offers "an imaginative gesture of what one [food] future may look like".

At first glance, a sliver of pallid muscle tissue anchored in a culture dish and surrounded by a liquid growth medium does not look like an appetising alternative to a juicy steak, but by the end of the year it will form a component of an edible burger.

From seaweed for breakfast to high-end yoghurts and Korean sesame, Frances Cook reports on how manufacturers and consumers alike are licking their lips, thanks to an exciting new array of flavours and combinations.

As the industry gears up for the Christmas sale, Stephanie Phillips investigates this year’s trends in sweets and confectionery and finds out which flavours and formats are set to become this season’s favourites in the UK.