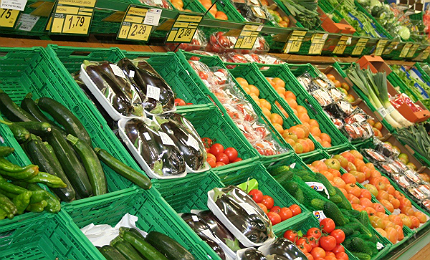 Considering its undeniable importance, the process of producing everyday food products is surprisingly invisible to the modern, urban populations that increasingly take their sustenance for granted. Europe’s recent and ongoing horsemeat scandal will have served as a wake-up call for many, with the unpalatable consequences of lax regulation and industry complacency laid bare.

"If you’re going to attract good people, what you don’t want them to do is get stuck in a rut."

And with global demand for the kinds of food products to which we’ve all become accustomed set to rise in pace with the world’s ballooning population, farmers and food processors around the world are going to have their work cut out to keep up, especially if the industry is to avoid repeating safety and quality failures like the horsemeat farrago.

In response to this pressure, the UK Government recently launched the Future of Farming Review, which is currently seeking opinions from the food sector to find the best ways to encourage young talent to enter the industry as it strives to expand and innovate to meet the demands of the global market.

The review group, which is due to present its report in July 2013, is chaired by David Fursdon, chairman of the South West Rural and Farming Network and former president of the Country Land and Business Association. We talked to Fursdon to find out his hopes for the review and get the lay of the land for the UK’s food industries.

Chris Lo: How would you describe the situation at the moment in terms of attracting young people to a career in the UK’s food and farming industries?

David Fursdon: I think in some ways it’s a little bit better than it was, probably as a result of programmes like Masterchef and Countryfile, which I think have helped. So there is a bit more interest in careers in that direction.

I would say there is still a lot of ignorance as to what’s involved, particularly on the farming side, and I think there is still a feeling among careers advisors and teachers at schools that this is an industry that you go into if you can’t think of anything else to do, rather than something that you aspire to do if you’re very good. Of course, there are good people in the industry and they shine when they get into it, but I think the image of it could be improved so that people understand what a rewarding career it can be.

CL: Presumably there needs to be a major boost in the recruitment of high-quality candidates if the UK food industry is going to expand to meet increasing future demand?

DF: Exactly right. There are two aspects to that. It does need to attract a better pool of talent if we’re to feed the world. If you look at maps of the effect of global climate change, for example, it’s increasingly obvious that we are part of a European bloc that is going to need to produce a lot of the world’s food. So we’re going to have to have the right people to do it.

Secondly, we’re going to have to do it in a way that is sustainable, which means looking after our resources properly. That requires skill as well. So from that aspect, you can see everything pointing towards needing a bigger talent pool, perhaps, than we have.

CL: At what stage is the Future of Farming Review at the moment?

DF: We have drawn up some templates to give people an idea of what they might like to feed into it. We’ve called for views, which we’ve asked to be in by 5 April, and that call for views can be found on Defra’s website. That will hopefully elucidate various comments from a wide variety of organisations.

"The food industry doesn’t sound like a particularly sexy career option when you’re at school."

In fact, we’ve got two calls for views – we’ve got a sort of young farmers’ questionnaire for young people who are either in the industry or trying to get into it, and those are career-type questions. And then we have a bit more of an in-depth opportunity for organisations to comment on particular challenges or problems, or want to suggest solutions.

All of that, we hope, will be in by 5 April. We have reserved a few days for interviewing organisations ourselves so that we can get more information on things that require further clarification or are quite controversial. There will be a quorum of our review group who will meet with those people and will hopefully thrash out what might not be clear in their written submissions.

CL: To your mind, what are the major obstacles preventing more people from entering the industry, or preventing employers from finding the right people?

You start at the education level and you ask, ‘Are people interested in these sorts of activities when they’re at school, and are we getting that right?’ Then, once they’ve shown an interest, what’s the next stage? Have we got higher education right – are we offering the right courses in the right places for the right people?

You’ve then got to think about what sorts of jobs they can do – where are those jobs? What are the barriers to that? For those who want to start their own business, that may be access to capital or access to land; it might be the structured tenancies; it might be the tax situation.

In terms of employment – and I think one should not just think about it as people running their own businesses; I think there are good opportunities in employment – what are the training opportunities within firms? What is the career ladder for people, so they don’t get trapped – if you’re going to attract good people, what you don’t want them to do is get stuck in a rut where they can’t move on and see a career path.

CL: Do you think the industry’s biggest employers, like food processing and production companies, need to take a more proactive stance on things like training schemes and university recruitment drives?

DF: I think one of the challenges we have as a group is that there are a number of initiatives out there, and what we don’t want to do is do things that have already been done well by other people.

One of our tasks is to pool all of that together in one place, because quite often you find you go somewhere and there’s a small scheme that’s been set up, maybe by an agricultural society or a group that have tried to set up a scholarship, but the left hand doesn’t always know what the right hand is doing.

It’s all done with the best intentions, but with a lack of co-ordination. What we need to do is make sure that it’s clear, and perhaps help with that co-ordination as well.

CL: Do you think there is space for an over-arching industry body to help encourage more co-ordination in recruitment?

DF: There is a scheme that has already been launched, called Bright Crop. Bright Crop is an initiative designed to try and encourage the recruitment of individuals in science and engineering, using STEM [science, technology, engineering and mathematics] ambassadors to go into schools. We want to highlight schemes that are like that, which are industry-led.

But there are others as well – I think the other thing we need to do is to look at it up the food chain, from farming at one end and up through the food chain. Some of the big food retailers have got their schemes that they’re working on, and we want to make sure that people are aware of those.

CL: Do you think there’s a rural / urban divide in terms of the visibility and appeal of the industry? There’s a lot of young talent concentrated in large cities, but are they less likely to be aware of the work that goes into creating an end product in the food industry?

DF: I think that’s definitely the case. You’ve only got to see the results of endless surveys where people are saying that a blackberry is something you send messages on, not something that grows on a bramble bush. There is a disconnect; I think food is seen as an ingredient that you can cook with, but I think it’s the other connections – where did that food come from?

I think the horsemeat thing was quite a wake-up call. I think it did make people think about the product and what goes into it, and how the price will affect, to some extent, the quality of the ingredients. I think that has helped. But as is the way with these things, people forget and they blow over – there are opportunities to do something about it, and then it’s gone. And we do live in an increasingly urban country. So it’s a challenge, but that’s part of it.

CL: Could attracting young applicants to fields like food technology be a good starting point for young people who might not have considered the food industry before?

DF: Absolutely – when I mentioned Bright Crop and its work on science and technology, I think it’s part of creating the image that this is a very vibrant world. It’s an industry that’s got a lot more security, particularly at the moment, than a number of other industries. It’s got opportunity, and it requires high skill levels.

The trouble is it doesn’t sound like a particularly sexy career option when you’re at school. That is just one example of an area that needs to promote itself and be acknowledged as something that is a challenging and worthwhile career.

CL: If the industry can find the right mix of new talent, what do you think British food producers could achieve in the global market in years to come?

"With global climate change, we are part of a European bloc that will need to produce a lot of the world’s food."

DF: I said earlier on that we are in a prime position as far as global climate change is concerned.

With good technology and the climate situation, and provided we look after our soils sustainably, I think we do have the potential to produce great products and we are increasingly developing those into a food industry that goes with that farming industry.

So the relationship between the farming and the food industry is important, and there needs to be sufficient profit at all stages of the food chain. That’s outside the remit of our group, but if we’ve got that then I’m optimistic.

Discovering new ways to train the food scientists of tomorrow

Fluorescent sushi: experimenting with futuristic glow in the dark food

‘Stop and Glow,’ ‘Kryptonite’ and ‘Not-in-California’ are all dishes based on a new glow in the dark sushi.