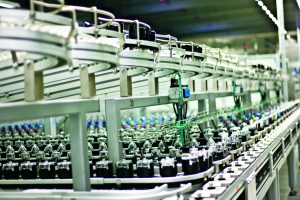 The filling and packaging equipment built by Optima has continued its growth trend. The year 2011 topped all others with a consolidated turnover reaching €220m (€210m in 2010). On 31 December 2011, 1,500 people worldwide were employed by Optima, approximately 200 more than in the previous year.

In pharma, consumer, nonwovens and life sciences industries, Optima is recognized as one of the leading providers of automated filling and packaging equipment. Depending on the product, competencies extend all the way to the production process. The continued export quotient of more than 80% underscores the strong international standing of the company. The largest portion of the turnover was made in the US (30%), followed by Germany (20%). Twenty percent is accredited to the remainder of Europe, and a further 30% in the rest of the world (ROW).

Hans Bühler, managing partner, is expecting growth in all areas in the coming years. "Not in the least due to synergic effects across industry branches, Optima looks to a promising future in the short term." As an example of the synergies, Mr Bühler cites a recent example from the Optima Consumer division, which combines competencies in filling of paste-like products, foil processing and cartoning equipment. The customer manufactures filled ‘pillow bags’, attaches a pump, and places in cartons with perforated flaps. The ‘pillow bags’ are used in soap dispensers, among other things.

Based on the steady upward trend in the past, and the positive future outlook, Optima will be investing around €50m in its headquarters by 2013. New buildings and building renovations as well as refurbishments to the IT infrastructure aim to bring the site to state of the art. New technologies and the manufacturing center will also profit from the investment.

A look through the branches

In the recent past, Optima Pharma drew attention by placing itself into the position of a true turn-key supplier. By acquiring Metall + Plastic (Radolfzell) at the beginning of 2011, another important step was taken. The integration of the company was quickly secured with several orders in which the processing chain was expanded by providing – aside from the standard filling and closing – e-beam decontamination, isolators, and freeze drying. At the same time Optima Pharma is offering so-called ‘multi-use’ equipment. Custom tailored, advanced, fully automated and often more compact machines which operate under the highest sterility classes and work with all varying types of pharmaceutical substances.

Optima Consumer will profit considerably in 2012 from the consolidation of all departments into a new building complex. Furthermore, all activities will be drawn together to Optima Consumer, which will expand the breadth of offers and provide enormous technological diversity in which robotics and vision systems will play a central role. Here also, the trend is toward a complete (turn-key) line. Leading packaging equipment for single-serve coffee pads, the cosmetics industry, cartoning equipment, high precision dosing systems for powder and paste-like products and assembly equipment for air and water filters round out the cornerstones of Optima Consumer’s excellent market position.

Optima Nonwovens remains the technological leader for packaging of paper hygiene products. The traditional, flexible, high-output machines for the primary packaging are now being joined by machines which complete the process chain; palletizers specifically suited to the Nonwovens products. The newly opened "Technidrom" (2011) allows customers to test the entire end-of-line packaging with their own products. Optima Nonwovens is also forging ahead with after-sales service innovations, which look to profit the entire Optima group. In the first half of 2012, the first stage of a new maintenance system will be introduced to the market, in which the status of the machine will be automatically monitored and analyzed to make recommendations on the service intervals.

Optima Life Science offers modular, integrated equipment for the manufacture and packaging of modern wound care products. Two current projects include the linkage of the machines to the customer’s SAP-ERP system. The software solution was developed in-house by Optima Life Science. Another distinguishing trademark of the Life Science branch is the modular machine system ImmuCoat®. Designed as a complete production center for immunoassays, such as the ELISA kits, the machines contain process modules for coating, incubation, drying and packaging of microtiter plates. Depending on specifications, the process modules can be recombined in a different order, or expanded at any time.

Here, as in all the branches of the Optima Group, mechatronic competencies are central to success. The participation of the Nonwovens branch in practice oriented mechatronic projects such as MEPROMA, funded by the European Reasearch Initiative EUREKA, have high profile value in the company.

In 2012, Optima will take part in over 40 trade exhibitions, bearing its new corporate design. The design emphasizes the unity of the company and puts the brand common to all branches, Optima, in the forefront.

"We want to present ourselves as a singular entity – under the parent brand," explains Hans Bühler, managing partner, adding, "We are one company, have one spirit and speak one language."