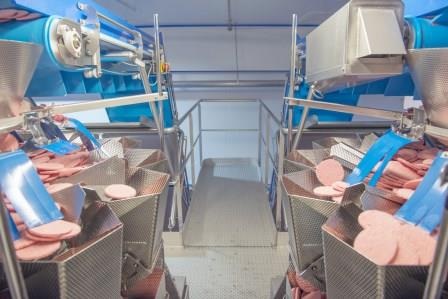 Part of the Brazilian company Marfrig, McKey produces millions of burgers every working day (42,000t annually) for one of the world’s largest restaurant chains.

Burgers are produced in 20 different weight variants, predominantly 110g. They are placed in pockets, which are then inserted into cartons, usually of 13.5kg.

The best performance the previous weighing equipment, installed in 1992, could achieve was to get within five burgers (550g) of the target weight.

The accuracy of the new Ishida CCW-RS multihead weighers, 14-head, waterproof models, each equipped with 5l hoppers, means that McKey now achieves an approximate deviation from target weight of 1g in each carton.

Another key reason for the selection of the Ishida weighers was their reliable operation. Burgers have to be kept moving continuously through the process and any downtime in the packaging section can cause problems.

Ishida’s design of bacterial traps and making cleaning effective, covering not just food contact surfaces but also structural elements such as legs and struts, led to the company also being made responsible for conveying and infeed equipment from the exit of the IQF tunnels to multihead weighers.

Ishida installed on the weigher platform a ‘wash wall’ where contact parts can be cleaned and allowed to drain.

Ishida weighers are a key component of five new packing lines, which also comprise bagmakers and casepackers, installed as part of a €25.5m modernisation plan at McKey’s factory in Fleury-les-Aubrais in northern France.

The objectives were to reduce manufacturing costs and increase the value added per worker, while continuing to meet high output demands of a world-leading brand.

Given the importance of uninterrupted supply to restaurants, the modernisation process was carefully planned to take place within a two-week window. This was accomplished as planned.

The choice of Ishida weighers seems to have been fully justified.

"Since the introduction of the Ishida multihead weighers, we have had zero maintenance costs."