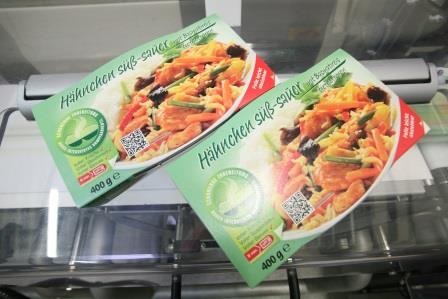 In conjunction with its customer, leading German frozen food manufacturer Jütro Tiefkühlkost, Ishida Europe has designed and installed a bespoke packing line to handle the weighing, sealing and check weighing of a range of individually quick frozen (IQF) ready meals.

The line comprises a 20 head Ishida CCW-RV mulithead weigher, QX-1100 Flex tray sealer and DACS-G check weigher, filling various different tray sizes at speeds of up to 70 per minute. This has delivered a 40% greater yield in comparison with the company’s older tray sealing line, resulting in a fast payback on investment.

The multihead weigher is able to weigh three different products, meat, vegetables and rice or pasta, simultaneously for discharge into the trays.

The RV model combines speed and accuracy with a highly robust design, which is ideal for the demands of IQF foods. Its heavy duty contact surfaces ensure minimal product adherence, while the weigher is certified to the highest level of waterproof protection, IP69K.

Speed and weighing accuracy are maximised by the use of booster hoppers, which provide temporary storage of already weighed products. This increases the number of possible weight combinations for each weigh cycle.

The weighments are collected in two timing hoppers before being transferred to the trays.

After the addition of water and sauce, the filled ready meal trays reach the Ishida QX-1100 Flex tray sealer.

The compact, single-lane model can handle seven trays at a time and creates an airtight seal using Ishida’s inside cut technology. The basic shape of the trays is the same with their height varying between 50mm and 70mm, which means no changes are necessary in the tray sealer.

The high sealing pressure, combined with precision control of the sealing time and temperature result in perfect seals and tray appearance.

Meyer added: "In comparison with other tray sealers, the QX-1100 Flex is extremely straightforward.

"In particular, the easy handling of the film minimises downtime.

"In the event of faults, the affected sealing heads can be individually disabled and the tray sealer continues to operate, diverting the supply of trays automatically to the still operational sealing heads.

"After shift end, the faulty sealing head can be checked over, without wasting precious production time."

The DACS-G checkweigher with integrated metal detector rejects out-of-spec packages and operates reliably in the low temperatures and high humidity of the production hall.

A newly developed loadcell enables high speeds during product inspection, while the checkweigher is extremely robust and has a protection function, which automatically disconnects the weigh sensor from the belt in the event of external disturbances.

The machine then immediately resumes operation.

Jütro Tiefkühlkost is operating the new tray packing line in a three-shift mode.

"We then resolved a few teething troubles together with Ishida and, since then, the system has been working faultlessly."