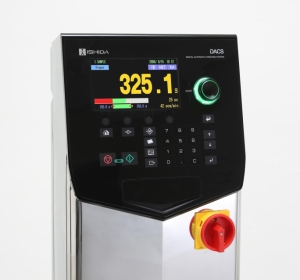 The Ishida Europe stand at Foodex 2012 (stand H260 in hall 19) will showcase the latest developments from the company’s market-leading range of weighing and quality control equipment. Highlights include the latest additions to the Ishida checkweigher and X-ray ranges, plus advanced weighing solutions for typically hard to handle sticky and fresh products.

The new DACS-G checkweigher is capable of exceptional speeds while maintaining high accuracy, and, at the touch of a button, can switch between two weighing ranges, allowing food manufacturers to handle more products on one machine. A unique dislocating force limiter automatically disconnects the weigh sensor from the weigh conveyor should sudden excessive force be applied (for example during clean down), protecting the DACS-G against rough handling.

Like all models in the DACS range, the new DACS-G can be easily integrated with the Ishida Data Capture System (IDCS), a user-friendly, secure software programme that can record the data of every pack weighed from up to 100 checkweighers into a single secure database. The IDCS offers an extensive range of reporting options to enable production managers to employ state-of-the-art monitoring for legislative compliance while also identifying cost-saving opportunities, minimising product giveaway and improving production efficiencies.

In addition, Ishida will be demonstrating an entry-level version of its market-leading X-ray inspection system, which offers food manufacturers an affordable solution for maximum quality control in their packing operations.

The IX-EA-2161 has been designed to inspect thermoform and top seal trays and other smaller size packed and unpacked product, and offers higher detection levels than metal detectors, checking products for a much wider range of foreign bodies. It can operate at belt speeds of up to 60m/min.

Multihead models on show at Foodex 2012 include the CCW-R-214 and FFW (Fresh Food Weigher). The CCW-R-214 is a standard frozen food weigher, designed for the fast and accurate weighing of small to medium frozen food products, whilst the Ishida CCW-NZ-106 Fresh Food Weigher offers an effective solution for the handling and weighing of sticky products such as meat, poultry, fish and fresh and dried fruit. The CCW-NZ-106 features a linear multihead design, fed by belts from an infeed table, with an operator able to adjust the flow of product so that each pool hopper receives a roughly equal amount.