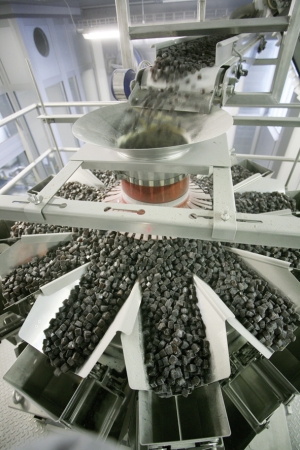 The introduction of Ishida equipment at a world-famous throat lozenge manufacturer has reduced product breakage during packing, as well as markedly increasing throughput and minimising giveaway.

Ricola, based in Laufen in Switzerland, has been making herbal confectionery for more than 70 years and has built up a dedicated customer base all over the world, including many opera singers and pop stars.

Expansion of other activities within the factory meant that a line packing 100g, 250g and 400g tins had to be moved. Ricola took the opportunity to upgrade this line, and asked the Ishida distributor in Switzerland, Itech, to come up with a solution that would improve quality by reducing the level of product chipping and breakage.

An original Ricola herb drop weighs about 4.2g and contains extract from a special blend of 14 herbs, including marshmallow, peppermint, thyme and sage. Each lozenge is cut from a warm filament, leaving two ridged surfaces which, on cooling, present many brittle facets. While this gives the product a texture and appearance that is very distinctive and much loved, the pieces can easily be damaged by collision with other lozenges or with metal surfaces.

On the new line, product arrives via a conveyor equipped with a suction system that removes dust and debris. It then runs via an elevator to the top of the multihead weigher.

The 12-head Ishida weigher is designed with short drop distances, while the discharge chute is divided into sections to minimise product swirling and reduce collisions. The weighed product passes via timing hoppers and chutes to a special filling station installed by Itech, where the tins arrive on a carousel to be filled two at a time. They then move on for lidding and overprinting with batch data.

Another aspect which Itech had been asked to attend to was cleaning downtime. The new line complies with IP66 standards, enabling it to be conveniently hosed down rather than individual parts having to be removed. One of the factors making this possible is unique to Ishida: a positive pressure maintained within the body of the weigher renders it watertight.

Ricola says the quality improvement has met all expectations, with a sharp decrease in breakage debris and more ‘perfect’ lozenges per tin than ever before. According to the company’s technical and engineering manager, Daniel Bhend, the investment in replacing the drum-packing line has been "a success in every respect", while involving Ishida and Itech "has given us a one-stop shop for the multihead weigher, the gantry and the carousel".