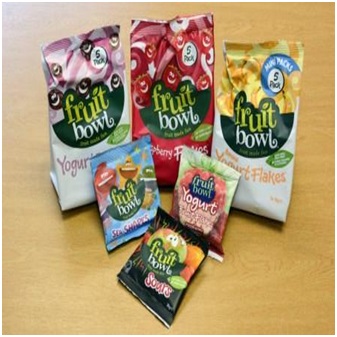 The project team at Ishida Europe has devised what is claimed to be Europe’s fastest multihead weighing and packing line with a turnkey installation, including a 28 head model from the company’s latest generation RV series that is achieving 400 packs per minute at Stream Foods.

These machines have now been redeployed to continue to add value on more specialist products where speed and output are less critical.

As well as quadrupling the speed of the packing operation, accuracy levels have also been improved.

Stream Foods factory manager Andy Spall said: "Product giveaway is a cardinal sin and this is something we particularly wanted to address with this new installation.

"Just half a gram overweight in a 20g pack quickly amounts to a huge amount of free product over a single production run.

"With the Ishida solution, we are now constantly to within a tiny fraction of the target weight."

As well as the two multihead weighers, the Ishida solution included the supply of conveyors and a flighted elevator, and incorporated Stream Foods’ existing Ishida DACS-G checkweighers along with the two bagmakers specified by the company.

In addition, Ishida has supplied its pioneering IDCS II, an integrated data capture system, for the checkweighers.

This enables Stream Foods to closely monitor its production and packing operation in order to provide early warning of any problems that can affect the overall speed and efficiency of the line.

The success of Stream Foods’ Fruit Bowl ranges meant its existing weighers were struggling to keep up with demand, so the company was seeking a solution that will deliver the speed and accuracy it required, as well as a rapid return on investment.

Engineering manager Peter Green said: "We discussed our requirements with a number of multihead weigher manufacturers and our initial specification was for 200 packs per minute, but Ishida was quickly able to demonstrate that it could offer double this speed with high levels of accuracy."

Key to achieving the high speeds has been the effective interface between the 28 head weigher and the GEA bagmaker. The weigher itself is split into four sections, each one delivering 100 packs per minute and feeding two timing hoppers positioned above the twin bagmaker.

For the bagmaker to keep up with the high speeds of the weigher, it is essential that each drop of product falls as a single slug rather than a long stream.

To achieve this, the profile of the bagmaker former was adjusted to enable the timing hopper to sit as low as possible inside the former. This ensures that product falls as a unit and without touching the sides, which could also slow the discharge into the bag.

The new line requires five instead of six or seven operators, while delivering nearly four times the output over a 16 hour period than the previous weighers achieved in 24 hours.

From the early stages, Ishida and Stream Foods worked closely in the development of the project.

Initial product tests in Japan were followed by a complete PDI and testing of the line prior to its installation at Stream Foods’ factory in Wisbech, meaning the process ran smoothly, with all deadlines met and the line achieving high speeds from the outset.

Green added: "It was a very consultative, two-way working relationship and this ensured that any potential problems could be identified and dealt with before they became an issue.

"Once the line was installed, we gradually increased speeds, making sure everything was right with each level before moving onto the next one."

One notable benefit of this partnership approach was the final compact layout of the installation.

Green said: "We initially envisaged a single long packing line but this would have meant having to raise the roof level in two parts of the factory to accommodate both multihead weighers.

"The engineering team from Stream then pointed out that if we installed a return conveyor after the weighing and bagging of the primary packs, we could place the 16 head multipack weigher next to the 28 head weigher.

"As a result, we have only had to raise the roof in one area and we have a far more compact operation, where one operator can control both weighers."

Andy Spall and Peter Green both had experience of Ishida in previous jobs, so knew what to expect concerning the technology, reliability and ease of use of the Ishida equipment.

The new weighers have continued to deliver these benefits, with fast changeovers, easy cleaning and no performance issues since their installation.

Ishida provided full training for operators at its headquarters in Woodgate.

Spall said: "We ensured all our people were also fully involved in the project from the outset, and their input has also been an invaluable part of its success."

Currently the multipacks are put into cases by hand. Stream Foods is in the process of automating this part of the operation and create a fully automated line.

Spall added: "Ultimately this line has made us far more efficient and for that reason we anticipate a fast payback on the investment.

"Furthermore, as well as the speed and accuracy we needed, the line also gives us the flexibility to respond quickly to customer requirements, for example a special promotion, and also to be innovative in our product development.

"Indeed, new pack formats are already in the pipeline."