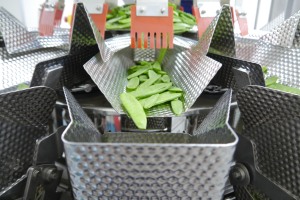 An Ishida CCW-R-214 multihead weigher is delivering excellent speed and accuracy that has substantially increased throughput and reduced giveaway for the weighing of sugar snaps, mange touts and other fruit and vegetables at a leading Dutch supplier.

The company is one of Europe’s biggest tropical fruit and vegetable suppliers, sourcing around 2,000 different products from across the world and producing approximately 15 million packs per year for a wide customer base that includes several leading European retailers.

The weigher was installed following a request from a major customer for sugar snaps and mange touts to be packed in pillow bags from 200g to 500g in weight. Giveaway on the company’s existing multihead weighers proved to be too excessive and a more accurate and also faster alternative was therefore required.

With the new Ishida weigher, giveaway has been reduced from around 5% to less than 1.5%, particularly critical as the company is packing to minimum rather than average weight; and with a top speed of 140 packs per minutes the machine can easily handle the required 50 to 70 packs per minute of this line.

Such speed and efficiency become even more important when the company needs to ramp up production for a special promotion, where for example the weigher may be required to produce in excess of 160,000 packs in the space of a weekend.

At the same time, the flexibility of the machine and its ability to handle many different types of products are already providing a valuable added benefit. The Ishida CCW-R has subsequently been used to pack physalis and peppers and the company is continuing to explore other options to maximise the use of the machine across its products ranges.

Such flexibility is further enhanced by the Ishida’s ease of use. Its graphical interface makes day-to-day operation very simple; and the availability of different languages is of particular importance in a factory where there are workers of many different nationalities. Different access levels ensure essential machine settings cannot be altered accidentally.

Each product and pack size has a separate entry in the Ishida memory, meaning changeovers can be carried out literally at the touch of the pre-set buttons. A full wash down can also be quickly and easily carried out at the end of each day.

Ishida’s project design capabilities were a critical factor in the success of the installation. The size of the weigher required the ceiling in the factory to be raised while the entire line has been designed to maximise the compact space available. Product is placed on a screening conveyor for checking and then carried to the top of the weigher via an inclined conveyor. After weighing and bagging, the packed product passes out directly under the infeed conveyors for subsequent checkweighing and packing into cases.

Another innovation of the layout is a special swinging stair, which provides access to the top of the weigher and which can be moved out of the way in order to ensure a fire door in the factory is not blocked.

Ishida has also supplied one of its market-leading DACS checkweighers to the company and with the success of the installation and the savings achieved, the company is now in discussion with Ishida for the supply of further equipment.