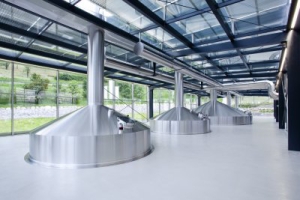 During 40 years of continuous around-the-clock operation, the tanks and vats in the Forst speciality beer brewery’s old brew house (Italy) produced 25 million hectoliters (hl) of beer. Now, since brewing technology has progressed, especially with regard to energy aspects, the management decided to construct a completely new brew house which was to operate highly efficiently, comply with the latest safety requirements, and produce the lowest possible emissions. In the very first week after start-up, the brewery reduced its primary energy consumption by 30%.

Five large vats, including the technology and piping systems, a newly designed water supply, and a malting plant with twelve silos as well as three separate storage vats – the engineers and technicians had just 16 months to construct the main components from scratch for the 154-year-old Forst brewery in Algund, South Tirol. The 4,800m² glass facade offers a view of the plant, which is considered a model of modern European brewing. Up to twelve brews per day can be produced, each with a volume of 630hl. The annual production capacity is 900,000hl.

Each drive unit tailored to its task

NORD DRIVESYSTEMS assembled the geared motors for all the vessels according to the specific requirements of the various applications, from the grinding mill, which gently grinds the malt at the start of the brewing process, to the screw conveyor removing the spent grain. In the first stage of the process the malt is mixed with spring water from the nearby mountains in the mash tuns. The mixture is then heated to various temperatures by means of thermally optimised conducting surfaces at the bottom and the frames of the mash tun. A frequency-controlled NORD helical bevel gear motor, equipped with a temperature sensor, drives the agitator inside the vessel. Subsequently, the liquid is pumped into the lauter tun.

Measuring 8.6m in diameter and weighing close to 21.5t, the lauter tun is the heart of the brew house. The liquid and solid parts of the mash are separated in a fully automated process. As the spent grain settles on the floor of the vat, it forms a natural filter layer. A special raking machine loosens this layer in order to ensure an optimum flow of the beer wort. Thus, the wort quality improves and raw materials are used efficiently. Pressure sensors at the bottom of the vessel detect the spent grain’s consistency, and the drive adjusts the machine’s speed accordingly. This intelligent control system enables flow rates between 9l and 14l per minute and square meter.

"NORD DRIVESYSTEMS assembled the geared motors for all the vessels according to the specific requirements of the various applications."

To check whether the system is running smoothly, the speeds, current consumption, and the motor temperature are centrally monitored continuously. Both tasks are handled by a custom-tailored NORD drive unit based on a splined hollow shaft. The drive is a combination of a motor, an industrial gear unit, and a helical bevel gear unit. It has a maximum torque of 96,000Nm and can continuously regulate the circumferential speed from one to 100 meters per minute – while providing a constant torque.

Accurate to the millimeter

Inside the lauter tun, the raking machine is lifted and lowered by up to 500mm. The lifting device works accurately to the millimeter, even under full load. A limit switch and an optical sensor were installed for exact positioning. The height can be adjusted during standstill, in an idle phase, and during operation. To this end, both the helical gear unit and the oil-hydraulic lifting unit are designed to withstand the axial and radial loads which occur in the process. The drive motor has an 18.5kW power rating and provides output speeds of 0.04 to 4 rpm. To ensure that the required speed is maintained, the motor has been equipped with an encoder. An external fan cools the motor at low speeds.

Both gear units feature oil expansion tanks to prevent lubricants leaking from the vent valves at high temperatures. A special sealing system on the industrial gear unit ensures that there is always an adequate lubricant film on the shaft. Due to the design, the lifting cage does not require additional oil reservoirs, which eliminates the problem of sealing. Following the UNICASE principle developed by NORD, all the bearings are integrated into a single housing block which provides excellent strength and rigidity. UNICASE housings have no sealing surfaces that could deflect under the effect of torque or radial forces. The compact and light gear units run very quietly and have a longer service life and lower energy consumption than multiple-part gear unit housings.

Dr. Walther Unterthurner, technical director at the Forst brewery, points out, "Constructing the new brew house, we wanted to ensure that the resources would be processed as gently as possible. Furthermore, we wanted to use these modern technologies to considerably reduce energy consumption and emissions."

Therefore, in addition to efficient facilities in the brew house, a new heat recovery system has been integrated into the vapour condenser. The heat required for the production of the beer wort is stored in a large energy reservoir in the form of hot water tanks at the rear of the building and is reused for subsequent brewing processes. According to Unterthurner, these various measures have already reduced the consumption of primary energy by 30%.

"Our target is to reduce steam consumption by at least 47%," he adds.